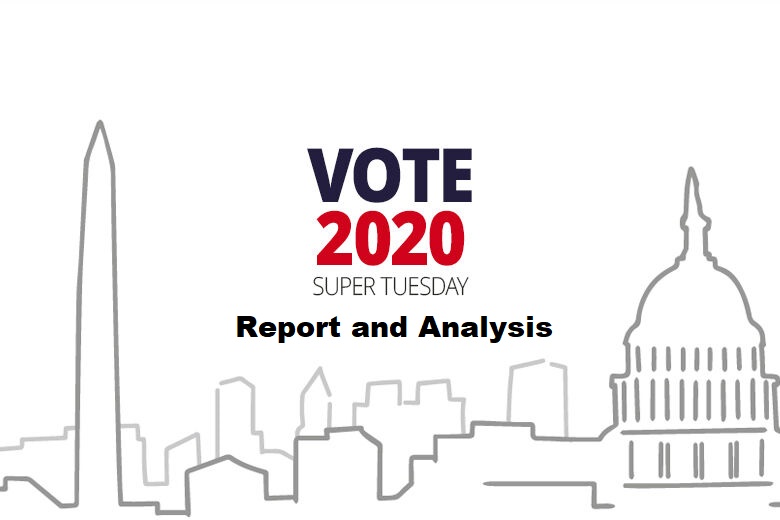 The 2020 Super Tuesday vote has been taken. The final result may not be known for a while (days) pending mail-in ballots and final counting. It is now time to take stock of where we sit today in terms of the political landscape for the presidential election in November.

Joe Biden did better than expected, winning 8 to 10 states (depending on final counts), though this does not tell the whole story in terms of delegate counts. Here is the current tally (which will change in time) of delegates from Real Clear Politics (note that California and Texas have yet to fully report – so don’t let the delegate counts fool you.):

Obviously, Trump is well on his way for the Republican convention win – no surprise here. But in all, the outcome of Super Tuesday was a great day for Trump. Here are the takeaways for Trump:

So where do we go from here? Though the delegate count is close, the primary calendar going forward would tend to favor Joe Biden – smaller more rural and African American areas. Sander’s needed to do better to overcome the coming primaries and win on a first ballot at the Democratic convention this summer. As stated in our pre-Super Tuesday analysis we gave the advantage to Sanders. This has changed, it is now advantage Joe Biden.

We still may be looking at a brokered convention, but as we stand today Biden could eventually win in subsequent convention votes – not to even consider the donor backing of Bloomberg. Many Democratic voters simply are not as radically Progressive as we have been led to believe. The fear of socialism led by Bernie Sanders gripped the Democratic party. Even as it might affect the down-ticket candidates as well. Does a Democratic candidate really want to be known as a socialist?

But do watch for the Black Swan events. Joe is not young, health issues, gaffe-prone and the race is not over by a long shot. Then there are events on the ground like the Coronavirus, potential geopolitical events, and the economy that could change everything.

The political season is just getting started, so keep your popcorn nearby. Either way, the Trump chances are turning from good to great!