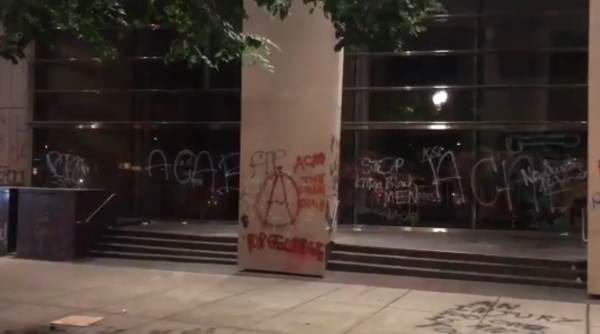 After the Portland police successfully broke up crowds downtown earlier in the evening, thousands who had gathered in southeast Portland marched through the city and into downtown. They converged, one again, at the “Justice Center” where they engaged in a stand-off with riot cops.

Video from around 11:30 pm on Sunday night outside the Justice Center in downtown Portland shows tense moments as police use flash bangs to deter protesters who were throwing fireworks at them.More: https://www.koin.com/local/multnomah-county/portland-protesters-civil-disturbance-day-3-george-floyd-05312020/

Though it was tense, it remained peaceful until the protesters-turned-rioters started attacking the federal courthouse. They reported breached the courthouse:

I’ve been told that windows were broken at the federal courthouse in Portland though I’m not sure. Here’s the scene, police pushed protesters away from the building pic.twitter.com/BYHkcqVzFZ

The federal courthouse in Portland pic.twitter.com/gkopkzjt3G

Police quickly started launching tear gas and flash bangs, and the crowd broke off in different directions. However, a large portion hung around in the area and then set their sights on the county courthouse:

Several fires were lit in the area:

Small contained fire started at Portlandia statue in downtown Portland, OR. It was quickly put out by another protester proclaiming “peaceful protest”