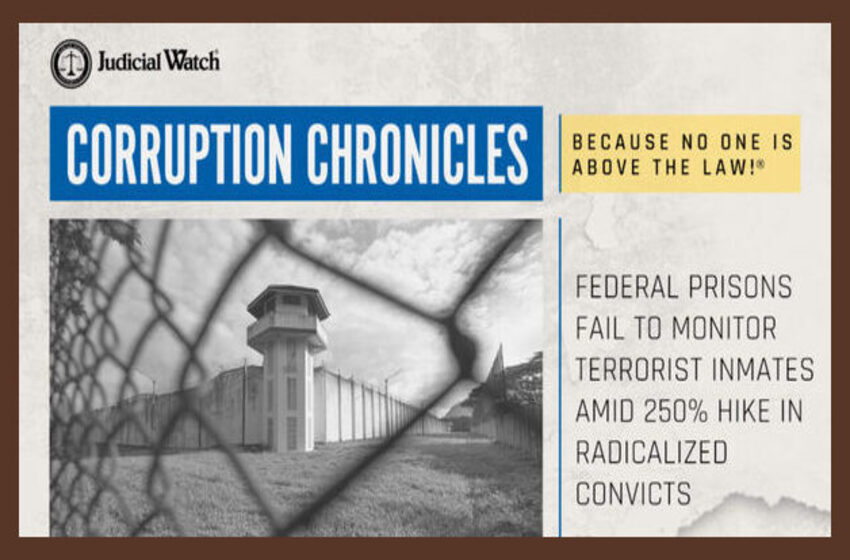 The nation’s federal prison system is supposed to keep America safe by, among other things, monitoring all social communications of high-risk inmates, especially those with terrorist ties. This is a crucial part of the Bureau of Prisons’ (BOP) duties considering that in the last decade the number of inmates with known links to terrorism increased by an astounding 250%. But surprise, surprise, the agency with a $7.1 billion annual budget doesn’t adequately check the communications of terrorist prisoners. Furthermore, the BOP, which operates under the Department of Justice (DOJ), hasn’t even bothered identifying all terrorists in its custody, according to a report issued this month by the DOJ Inspector General.

Portions of the 67-page document are redacted because the government claims that the original “contains information that the Department considered to be law enforcement sensitive and therefore could not be publicly released.” The adjusted public version, with a multitude of thick black lines substituting print, is enough to illustrate a big problem in the federal prison system. The BOP claims to be “an agency like no other” that protects public safety by ensuring that offenders serve sentences in appropriately secure facilities. The agency also provides costly reentry programming to ensure the offenders’ “successful return to the community.” In all, the BOP has 34,486 employees and 175,376 prisoners. The agency brags that is provides criminals with a myriad of programs that model “mainstream values” and “address criminogenic needs.”

Perhaps the nation’s federal prison system is a bit too accommodating to convicts. Even when the BOP monitors the communications of high-risk inmates, it doesn’t do it consistently and the inspector general found that “thousands of terrorist inmate communications” are only partially checked. Investigators offer the consequences of this negligence, writing that the disbursement of sensitive information—including videos, pictures and other documents—helps “radicalize other inmates.” In fact, investigators found that the “BOP has allowed at least one terrorist to view radical material provided to him through the discovery process in front of other inmates.” It is highly likely that there have been other similar cases not considered in this probe.

However, the report includes plenty of alarming incidents. During a recent two-year window, the BOP “did not review thousands of inmate emails, some of which contained potentially concerning language; and permitted terrorist inmates to communicate with unknown or un-vetted contacts,” the DOJ IG found. Even terrorist inmates placed in a Special Administrative Measure (SAM) requiring 100% live communication monitoring were not effectively monitored, according to investigators. Additionally, BOP officials are supposed to provide the Federal Bureau of Investigation (FBI) lists of convicts with terrorist ties who are set to be released, but the agency fails to do that as well.

It is a matter of national security to keep track of this dangerous demographic because the FBI has determined that the average age of the terrorist inmate population is getting younger and the average prison sentence is getting shorter. Therefore, the agency logically predicts that the recidivism rate of released terrorist inmates is increasing. Since 2001, the federal prison system has let go of more than 600 terrorist inmates, the DOJ IG reveals. Four years later the BOP began providing the FBI with a list of terrorist inmates about to be released from custody so that the agency could track them. “During our review, we found at least 40 inmates with a previously identified terrorism nexus that the BOP released without notifying the FBI, because, according to the BOP, it did not believe it had sufficient information to consider these 40 individuals to be terrorist inmates,” the report says.

Officials running the U.S. federal prison system did not dispute the watchdog’s beating or recommendations and promised to develop “a complete universe of previously unidentified terrorist inmates.” The agency has also vowed to improve its dismal monitoring system, including electronic mail, cellblock chatter, phone calls and written communications. “The BOP will revisit its social communication monitoring policy for high-risk inmates, including terrorist inmates, to better ensure that all visits between terrorist inmates and their visitors are sufficiently monitored,” according to the report.