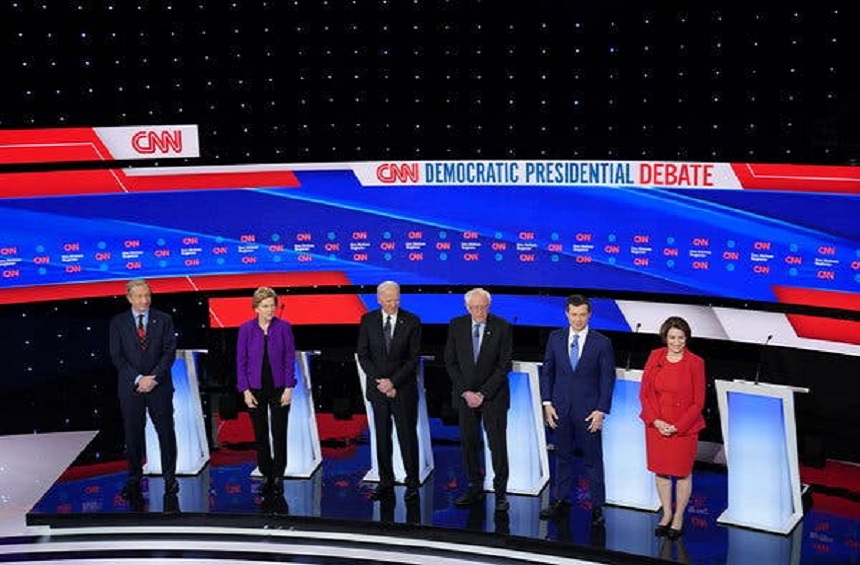 With 20 days to go to the February 3 Iowa caucus, the Democrats held their final pre-primary debate in Des Moines, Iowa.

The debate was fairly benign. Since Joe Biden is the Democrat default candidate, with no major gaffs, I guess we will give the win to Joe for the debate. There were a few zingers. Probably the biggest contentious moment was when the two Progressive candidates went after each other on, you guessed it, Identity Politics.

Sanders denies telling Warren a woman can’t be president: “I didn’t say it.” Sanders went on to say, “Well, as a matter of fact, I didn’t say it. And I don’t want to waste a whole lot of time on this, because this is what Donald Trump and maybe some of the media want. Anybody knows me knows that it’s incomprehensible that I would think that a woman cannot be president of the United States.” Warren didn’t really have a good comeback.

There was a bit of a tussle on trade policy – but mostly anti-Trump platitudes about working together. In terms of foreign policy, Joe Biden defended the need to keep special forces in places such as Iraq, and Klobuchar also said she would leave U.S. troops in the region. But other candidates pledged to withdraw “combat troops.” Despite the calls to withdraw ground or combat troops, it remains unclear whether or how the candidates will pull back entirely from the region.

Axios – Quite a bit of time was spent on Medicare for All and any potential new Democratic healthcare initiatives that would come if president. RFSO detected a little more reality of costs coming into the debate – Democrats moving away from the far left? We repost the positions of the candidates from Axios below:

As of this post, the top four Democrats stand at a statistical neck and necktie with caucus-goers. IBD, one a few pollers that did get the 2016 election largely correct, confirm this. Here is the latest poll on the Democratic presidential candidates national poll:

For the Iowa specific poll, it’s a shows this even tighter race:

The traders at PredictIt still show that Joe Biden is still the front runner in the Democrat presidential race – see the inset chart.

Who will win in Iowa? It is hard to say, and may not matter. It is not like it was in the past, where a long primary process gave early front runners a boost. A month later on Super Tuesday, 14 states will become the real decision-makers.

Many believe we are headed for a brokered convention, because of this vote-splitting between the Progressive and Center-Left Democrats wings of the party. Given that the Democratic Super delegates can’t vote the first round, it is most likely to go to a second vote – maybe more.

Joe Biden has declared that he will refuse to testify at the Senate’s impeachment trial, even if he is subpoenaed. Not sure he has a choice – but we shall see. The point here is that if he does testify, will we get that, “I am not a crook” moment? This could enormously hurt Biden’s political chances.

On the Progressive wing side of the Democrats, Sanders and Warren are at each other’s throat. Looks like Sanders is winning that fight, but here again, we shall have to see. But the mainstream Democrats do not want this Progressive takeover of the Democratic party. If you asked us today who will be the eventual winners, it could be a brokered Biden–Klobuchar (or maybe Harris) ticket for the Democrats to face Trump. But we have a lot to get through first and this can easily change.

In the meantime, Trump polling and Trump’s economy are still strong. But don’t take anything for granted, Trump supporters must remain vigilant.