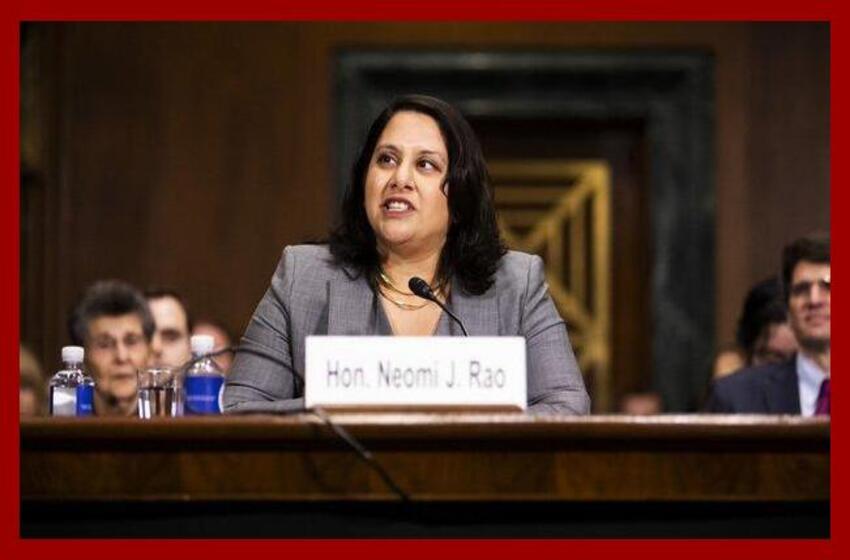 Neomi Rao testifies before the Senate Judiciary Committee during her confirmation hearing to be U.S. Circuit Judge for the District of Columbia Circuit, on Tuesday, February 5, 2019. Photo: Diego M. Radzinschi/ALM (via law.com)

The opinion, authored by one of the three judges on the panel, Neomi J. Rao, “thoroughly demolishes” a dissenting opinion by Judge Robert Wilkins – who Reeves thinks was so off-base that he “shot himself in the foot” when it comes to any chance of an ‘en-banc review’ in which the Flynn decision would be kicked back for a full review by the DC appellate court.

Reeves, who has written filings for US Supreme Court cases, unpacks Rao’s “outstanding opinion” in the below Twitter thread, conveniently adding which page you can find what he’s referring to (condensed below after the first tweet, emphasis ours):

THREAD re: Flynn mandamus opinion
1) Judge Rao’s opinion–joined by Judge Henderson–granting Flynn mandamus is outstanding not only for its legal reasoning, but also for how it COMPLETELY EVISCERATES Judge Wilkins’ dissenting opinion. https://drive.google.com/file/d/1tOhpG39DvFFYWGCxIOKsXBfVAh8Nfrtn/view?usp=sharing …

2,186 people are talking about this

In all my years of appellate practice, I don’t think I’ve ever seen a non-US Supreme Court appellate opinion that so thoroughly demolishes a dissenting opinion as this one. Judge Rao could not have done better in writing the opinion, and it should be required law school rdg.

In addition, Judge Wilkins’ dissenting opinion is so off-the-mark that I believe he has shot himself in the foot for purposes of en banc review–in other words, he has ensured that otherwise-sympathetic judges on the DC Circuit will vote against en banc review.

Judge Rao comes out swinging by holding that its earlier opinion in Fokker “foreclose[s] the district court’s proposed scrutiny of the government’s motion to dismiss the Flynn prosecution.” p. 7.

Keep in mind that Fokker was written by Chief Judge Srinivasan, an OBAMA appointee. Judge Srinivasan does NOT want Fokker’s legitimacy undermined, no matter his politics.

Judge Wilkins’ dissent implies that Fokker was wrongly decided, and that it conflicts with other federal appellate courts. See p. 23 of 28. Judge Srinivasan will NOT be impressed by this argument in deciding whether to grant en banc rehearing. Fokker does not create a split.

Judge Rao goes on to emphasize that while judicial inquiry MAY be justified in some circumstances, Flynn’s situation “is plainly not the rare case where further judicial inquiry is warranted.” p. 6.

Rao notes that Flynn agrees with the Govt.’s dismissal motion, so there’s no risk of his rights being violated. In addition, the Government has stated insufficient evidence exists to convict Flynn. p. 6.

Rao also holds that “a hearing cannot be used as an occasion to superintend the prosecution’s charging decisions.” p. 7.

But by appointing amicus and attempting to hold a hearing on these matters, the district court is inflicting irreparable harm on the Govt. because it is subjecting its prosecutorial decisions to outside inquiry. p. 8

Thus, Judge Rao holds, it is NOT true that the district court has “yet to act” in this matter, contrary to Judge Wilkins’ assertions. p. 16.

“[T]he district court HAS acted here….[by appointing] one private citizen to argue that another citizen should be deprived of his liberty regardless of whether the Executive Branch is willing to pursue the charges.” p. 16. This justified mandamus being issued NOW.

Judge Rao also makes short work of Judge Wilkins’ argument that the court may not consider the harm to the Government in deciding whether to grant mandamus bc the Government never filed a petition for mandamus. p. 17.

Judge Rao notes “[o]ur court has squarely rejected this argument,” and follows with a plethora of supporting citations. p. 17.

Judge Rao also notes–contrary to what many legal commentators have misled the public to believe–that it is “black letter law” that the Govt. can seek dismissal even after a guilty plea is made. This does not justify greater scrutiny by the district court. p. 6, footnote 1.

“Given the absence of any legitimate basis to question the presumption of regularity, there is no justification to appoint a private citizen to oppose the government’s motion to dismiss Flynn’s prosecution.” p. 13.

But Judge Rao saves her most stinging and brutal takedown of Judge Wilkins’ dissent for the end…..(cont)

Judge Rao writes that “the dissent swings for the fences–and misses–by analogizing a Rule 48(a) motion to dismiss with a selective prosecution claim.” p. 17. (cont)

While it is true that the Executive cannot selectively prosecute certain individuals “based on impermissible considerations,” p. 18, “the equal protection remedy is to dismiss the prosecution, NOT to compel the Executive to bring another prosecution.” p. 18 (emph. added).

And Judge Rao is just getting warmed up here….She then notes that “unwarranted judicial scrutiny of a prosecutor’s motion to dismiss puts the court in an entirely different position [than selective prosecution caselaw assigns the court].” p. 18 (cont)

“Rather than allow the Executive Branch to dismiss a problematic prosecution, the court [as Judge Wilkins and Judge Sullivan would have it] assumes the role of inquisitor, prolonging a prosecution deemed illegitimate by the Executive.” p. 18 (cont).

And now for Judge Rao’s KO to Judge Wilkins and Judge Sullivan: “Judges assume that role in some countries, but Article III gives no prosecutorial or inquisitional power to federal judges.” p. 18. (cont)

In other words, Judge Rao is likening Judge Wilkins’ arguments, and Judge Sullivan’s actions, to what is done in non-democratic, third world countries. p. 18. Outstanding opinion. No mercy. END

Like a liquid-metal terminator with half its head blown apart, the case against Michael Flynn just won’t die.

Hours after the US Court of Appeals for DC ordered Judge Emmett Sullivan to grant the DOJ’s request to drop the case, the retired ‘resistance’ judge hired to defend Sullivan’s actions has filed a motion requesting an extension to file his findings against Flynn.

The D.C. Appeals Court today vacated the lawless appointment of a left-wing shadow prosecutor to go after Flynn.

Gleeson, the Resistance dead-ender hired by Sullivan, is ignoring the order and plowing ahead with his illegal inquisition against Flynn. https://twitter.com/ProfMJCleveland/status/1275853006240731136 …

550 people are talking about this

In a major victory for Michael Flynn, the United States Court of Appeals for the District of Columbia Circuit has ordered Judge Emmet Sullivan to grant the Justice Department’s request to dismiss the case against the former Trump National Security Adviser.

“Upon consideration of the emergency petition for a writ of mandamus, the responses thereto, and the reply, the briefs of amici curiae in support of the parties, and the argument by counsel, it is ORDERED that Flynn’s petition for a writ of mandamus be granted in part; the District Court is directed to grant the government’s Rule 48(a) motion to dismiss; nd the District Court’s order appointing an amicus is hereby vacated as moot, in accordance with the opinion of the court filed herein this date,” reads the order. 94 people are talking about this

In their decision, the appeals court wrote: “Decisions to dismiss pending criminal charges – no less than decisions to initiate charges and to identify which charges to bring – lie squarely within the ken of prosecutorial discretion.”

“The Judiciary’s role under Rule 48 is thus confined to “extremely limited circumstances in extraordinary cases.””

Hence, no dice for Judge Sullivan.

Flynn pleaded guilty in December 2017 to lying to the FBI about his conversations with former Russian Ambassador to the US, Sergey Kislyak, during the presidential transition following the 2016 US election. He later withdrew his plea after securing new legal counsel, while evidence emerged which revealed the FBI had laid a ‘perjury trap‘ – despite the fact that the agents who interviewed him in January, 2017 said they thought he was telling the truth. Agents persisted hunting Flynn despite the FBI’s recommendation to close the case.

Once the FBI’s malfeasance was uncovered, the Justice Department moved to dismiss the case after Attorney General William Barr tapped an outside prosecutor to examine the FBI’s conduct. Judge Sullivan rejected the DOJ’s request – instead calling on an outside lawyer to make arguments against the DOJ’s move to drop the case.

In their Wednesday decision, the Appeals court noted that “the government’s motion includes an extensive discussion of newly discovered evidence casting Flynn’s guilt into doubt.”

Specifically, the government points to evidence that the FBI interview at which Flynn allegedly made false statements was “untethered to, and unjustified by, the FBI’s counterintelligence investigation into Mr. Flynn.” -US Court of Appeals

Sullivan urged the federal appeals court to also reject Flynn’s bid to bring an end to the case, which has now ruled against the judge.

Looks like @JoeBiden and @BarackObama were complicit in framing @GenFlynn.

Obama: “Have the right people on” Flynn case. 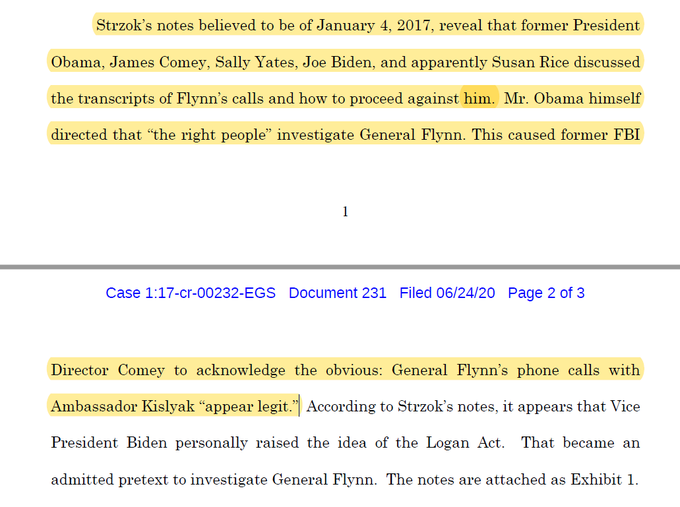 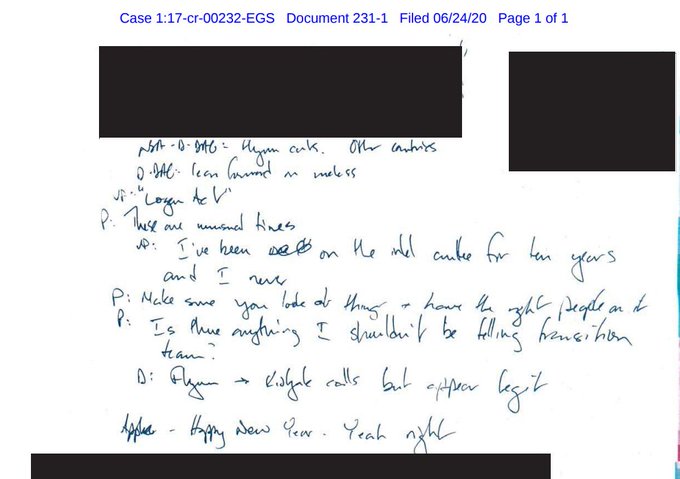 798 people are talking about this

Read the full decision below: