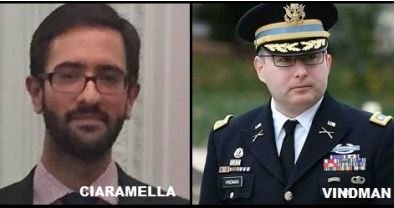 The humorless Laurel and Hardy of the Deep State are at it again.  Their efforts to slander and besmirch the President are not over.

Former US Attorney Joe DiGenova was on Mornings at the Mall on Monday, Labor Day and he shared this at the :45 second mark about last week’s Atlantic hit piece suggesting the President does not like the US military:

In fact the story is not true and you can tell for several reasons.  First, the author is by Jeffrey Goldberg, the editor of the Atlantic, a fallen apart magazine that is now published only online.  Four anonymous sources, so my guess is that two of the anonymous sources are Eric Ciaramella and Colonel Alexander Vindman of impeachment fame.  Now does anybody think if  this story were actually true that it would come out sooner than it has?

Later at the 6:30 mark DiGenova says:

It is very obvious that this is a coordinated attack that the story was told around, it was passed around to Democrat operatives to create the campaign commercials that were run immediately upon its publication.  So the notion that this is some sort of fresh piece of journalism is quite ludicrous.

Ciaramella was suspected of being the the whistleblower who created the false narrative that President Trump demanded the Ukraine President find more evidence of Biden wrongdoing in the Ukraine.  Biden had previously bragged about getting a Ukrainian prosecutor fired that was looking into to the company where Biden’s son was a Board member making an estimated $80,000 a month.  Ciaramella was also suspected of working for the CIA while he was in the White House and therefore spying on President Trump.

Vindman is no better.  He is suspected of being the individual who provided the false narrative to Ciaramella so that the illegal and unconstitutional impeachment proceeding could take place.

Ciaramella and Vindman are both like minded in their efforts to overthrow the Trump Presidency but different in stature.  Vindman is fat and barrel chested while Ciaramella is tiny and skinny.  Together they look a lot like Laurel and Hardy minus the humor.