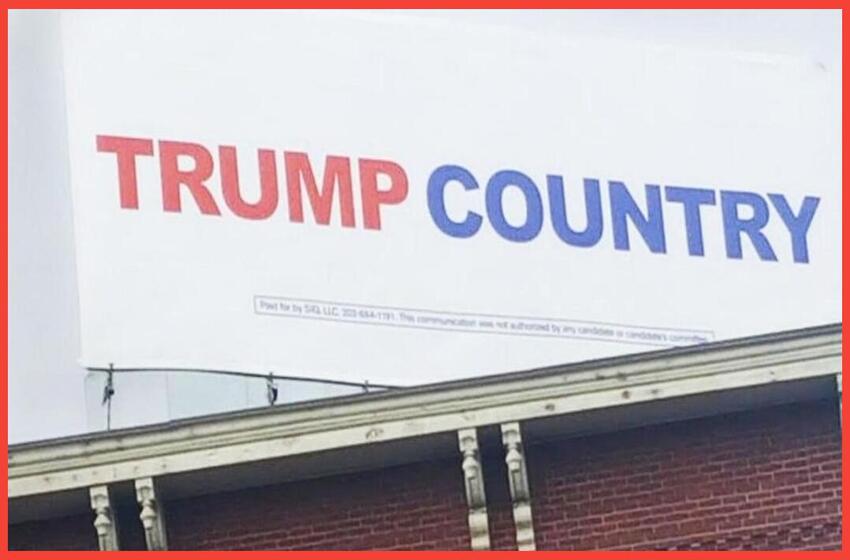 A pro-Trump billboard was removed in New Hampshire after the sign company received complaints.

Dave Streit spent $2,600 to display his “Trump Country” ad in downtown Nashua from Oct. 6 through Nov. 3. Outfront Media, which designed the display, notified him on Monday that it would be removed. It was taken down by Tuesday morning.

“We are political refugees. We watched what liberals did to Connecticut, so we moved here to New Hampshire where you live free or die, and no sooner than we get here, we are getting canceled.“ Streit told the Union Leader. “Free speech just got thrown out the window.”

Streit called the president “the most unlikely conservative imaginable,” arguing that the president has “delivered on every single promise.”

Outfront Media participated in the design of the “Trump Country” billboard and approved it. While his contract with the company had no ban on political ads, it does give Outfront the ability to remove any billboard that generates complaints. Streit will be refunded for the remainder of time the billboard was supposed to be on display.

“Unfortunately, we had complaints from our property owners regarding political ads. This is both Republican and Democrat,” MaryAnne Carpenter told Streit in an email. “We’ve been asked to remove certain copy on certain boards throughout the state — one of which is your location on Main Street in Nashua.”

“What perturbs me is that one or two complaints can make it come down — from just the mere mention of the president,” Streit said before he learned that the billboard had been removed.

Streit said he believes that if the sign was promoting Democratic nominee Joe Biden, it would not have been taken down.

“Even if someone on the Left wanted to put a sign up, I would defend their right to have the sign up — that is freedom of expression. Hang together or hang alone,” he added.

President Trump lost New Hampshire in 2016 by less than 3,000 votes. In this election cycle, however, the margin appears much larger.

A Suffolk University/ Boston Globe poll conducted between Oct 8. and Oct. 12 pegged Biden 10 points ahead of Trump, with Biden at 51% and the president receiving support from 41% of those polled.