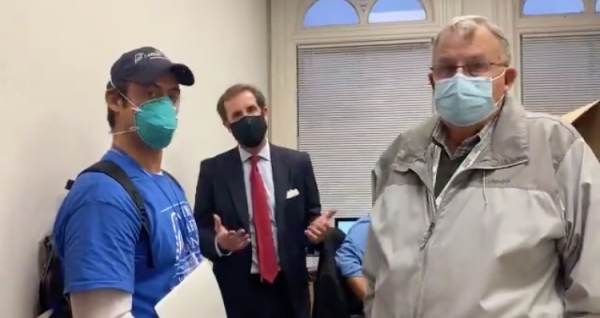 As reported earlier, a new batch of votes was found in Georgia Tuesday during the statewide recount in Fayette County, cutting Joe Biden’s lead over President Trump in the state by a reported 449 votes to just under 13,000. The issue today was reported to be a memory card that was not uploaded.

“Gabriel Sterling with the GA Sec. of State’s office says 2,755 votes discovered in Fayette County. Unlike in Floyd County, these were scanned votes that were in the system. 1,577 for Donald Trump 1,128 for Joe Biden. This makes a net gain of over 400 for Trump,” one local reporter said today.

Georgia elections officials were confronted about the 2,755 votes that were found today and they still didn’t have an answer to what caused the ‘error.’

The Dominion techs are the two gentlemen in the background sitting in front of computers and they said they were not allowed to comment.

Floyd County, GA: After a FULL day of rescanning, counting, & software techs troubleshooting, election officials (while VERY transparent), still had NO answer as to what caused 2700 votes to go uncounted. Dominion techs said they could not comment. Listen to this! @RealAmVoicepic.twitter.com/v6j9lMatXH

The Georgia recount is a total joke.

Governor Brian Kemp needs to step in and demand a full audit, including checking signatures and a hand recount with GOP observers present at every table of ballot counters.