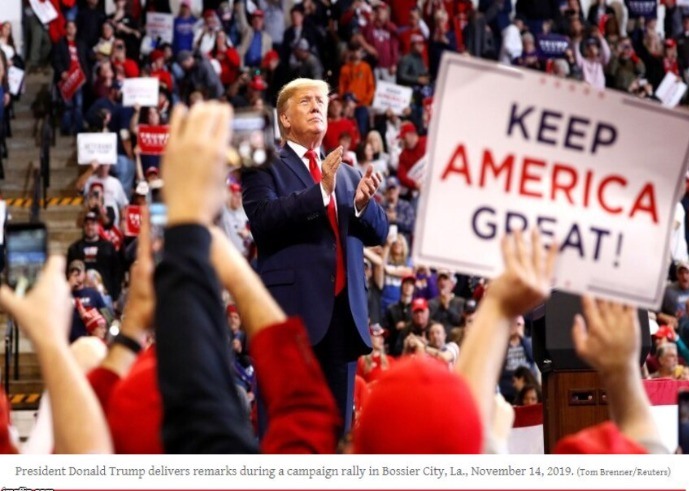 It will be even uglier than the 2016 contest.

Here’s a fun New Year’s prediction for you: The 2020 presidential campaign will be even uglier than the 2016 contest.

In part, that’s due to President Trump’s incumbency. In 2016, Trump almost surely did not think he’d win. Throughout his campaign, he would drop hints about an “exit strategy.” Exiles and members in good standing of Trump World admit both on and off the record that his was a protest candidacy or a publicity stunt.

In other words, President Trump in 2020 has a lot more to lose than Candidate Trump had in 2016.

Second, there’s no evidence that Trump has matured — “grown,” in D.C. parlance — with the job. He insists that being “presidential” is not an option because that would be “boring.” His willingness to use the nearest weapon to hand, rhetorically, is undiminished. But the resources at his disposal — both his official powers and his ability to employ traditional and social media — are greatly enhanced. Candidate Trump could not pressure a foreign power to help muddy a political opponent. President Trump could and almost certainly did.

Third, unlike in 2016, when he was executing a hostile takeover of a party and a conservative media establishment that simultaneously disliked him and underestimated him, Trump now has the support of both.

Last, the Trump presidency, unlike the Reagan presidency, has not elicited from the Democrats the kind of seriousness of mind about electability that pulled the Democrats back to the center. In response to Trump’s election, the Democrats have even moved to the left of Barack Obama, leaving Obama’s 77-year-old, gaffe-prone vice president, Joe Biden, to run almost alone as a politically moderate candidate.

We’re already seeing evidence of how the campaign will go. Here are two recent examples.

First, on Friday night, the president retweeted (and then deleted) a post naming the whistleblower in the Ukraine affair. If Candidate Trump had done something like that, criticism from the right would have been deafening.

Then on Sunday night, at an event in Milford, N.H., the famously tactile Biden was greeted by a handful of protesters. “Don’t touch kids, you pervert!” one man, who claimed not to be a Trump supporter, shouted. A woman started a brief chant of “Quid Pro Joe!”

For the record, Biden isn’t a pervert; he’s an all-too-handsy politician from a bygone era of glad-handing, back-slapping and hugging. But, given the new rules of the “Me Too” era, it’s easy enough to make the insinuation, and several Democrats have — a small example of how the hothouse atmosphere of Very Online Liberalism undermines electability.

It would be informative if a reporter had confirmed whether the protesters were free agents, Trump plants or emissaries for one of Biden’s Democratic rivals. But in the big picture it doesn’t really matter, because Trump boosters and even the mainstream media were eager to give the incident the kind of social media virality Team Trump loves. Countless Twitter accounts used the incident to spread the charge, often sprinkled with the kind of sobriquet Trump loves, “Dirty Joe.”

Of course, that nickname is useful for the other charge near and dear to Trump World: that it’s Biden who’s corrupt, not the president. At times the argument becomes a kind of dysfunctional mobius strip. “Quid Pro Quo Joe,” they claim, outrageously did what Trump is accused of by improperly pressuring the Ukrainian government. (Evidence of this is scant.) But if Trump improperly pressured the Ukrainians (as ample evidence suggests) would that be an outrage? “Of course not! All foreign policy is about quid pro quo!”

If Biden becomes the Democratic nominee, this is precisely how the campaign will play out: a kind of louder echo of 2016. A vast endeavor of “I know you are but what am I?” in which the president invites the machinery at his disposal to muddy the waters enough that everyone seems equally dirty. As with his campaign against Hillary Clinton, the president can’t make a majority like him, but he can certainly turn voters against his opponent.

The Trump campaign didn’t concoct the 2016 “Pizzagate” conspiracy theory (that the Clintons had something to do with a pedophile ring in a D.C. pizza joint). But he gave enough of a signal boost to the trolls — with retweets and interviews — that the line demarcating outrageous behavior moved far enough to make his antics seem in bounds. Now, Trump’s antics are, by definition, presidential and the policy of the GOP.

Of course, Biden might not be the nominee. But there’s no reason to believe that would change Trump’s behavior, when the presidency hasn’t. And the other possible nominees are sufficiently left wing to make Trump’s job even easier.

So cheer up, the worst is yet to come.