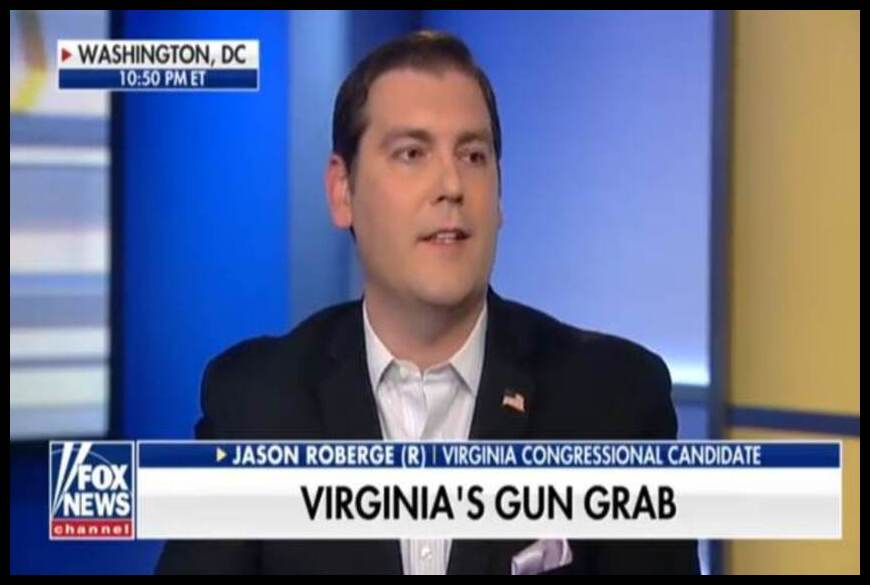 Jason Roberge, who appeared on Laura Ingraham’s Fox News program on Monday, made it clear in a release to The Gateway Pundit that he will not allow Virginia Governor Ralph “Blackface” Northam to bastardize our Constitution and our God given rights to bear arms. Roberge is running to represent Virginia’s 7th congressional district.

“Northam and his Michael Bloomberg funded allies in the House of Delegates have made it clear that our constitutionally protected right to bear arms is not only on the chopping block, but also the subject of a state powered Gestapo force looking to confiscate our firearms at whatever cost. Governor Northam and his thugs think that residents of Old Dominion will allow his politically motivated left-wing goon squad systematically track and intimidate law abiding Virginians without a fight. This could not be further from the truth.”

Liberal anti-gun billionaire and Democrat presidential candidate Michael Bloomberg has spent hundreds of thousands of dollars in campaign contributions and other influence schemes meant to push Virginia legislators to pass laws that will rip firearms from the hands of law abiding citizens, while ignoring our founding documents’ clear commitment to preserving our right to protect ourselves and families.

Roberge said his campaign is prepared to do “whatever it takes” to stop these illegal laws from punishing God fearing Virginians.

“The 2nd Amendment is NON-NEGOTIABLE. Political hacks and out-of-town billionaires cannot match up to the vigor and dedication that Virginians have in preserving our rights to life, liberty and the pursuit of happiness. We will not stand for a group of jack-booted thugs that are looking to disarm and degrade our constitution. I will fight these incursions on our liberty and freedom. We will ultimately settle this at the ballot box, but we must never rule our citizen action in the streets across Virginia, even if that means supporting the brave notion of resisting government backed gun confiscation and registration. Our campaign stands ready to do whatever it takes to stop the bastardaziation of our constitutional rights. No surrender and no retreat, not now and not ever.”

Thousands of patriots from around the nation are expected to converge on the Virginia state capitol on January 20th, where the Virginia Citizens Defense League is hosting a massive demonstration against Governor Ralph “Blackface” Northam’s illegal and unconstitutional laws aimed at disarming Virginians.

You can learn more about Roberge’s campaign and his efforts to protest the Virginia legislature’s anti-gun laws by clicking here.