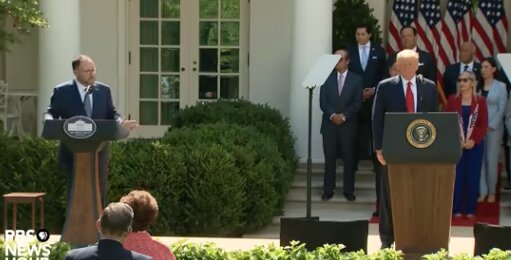 Robert Unanue, the president and CEO of Goya Foods spoke at a Rose Garden event at the White House Thursday for President Trump’a announcement of the Hispanic Prosperity Initiative. During his remarks, Unanue announced Goya employees were helping to donate one million pounds of food and one million cans of Goya chickpeas to food banks this summer to help ease a shortage at food pantries. Unanue also praised President Trump in his remarks, prompting liberals including leading Democrats to initiate a boycott of Goya Foods. (Link to executive order for the Hispanic Prosperity Initiative.)

Goya Foods CEO Robert Unanue: “We’re all truly blessed… to have a leader like President Trump who is a builder.” pic.twitter.com/2VdG4qAnpK

Before the Rose Garden event, Unanue also spoke at a round table meeting inside the White House with President Trump (excerpt):

I’m Bob Unanue, third generation. I’m CEO and president of Goya Food, Inc., a multibillion dollar company with facilities all over the United States and the Caribbean —

MR. UNANUE: — and Spain. We have about 4,500 employees we call “la gran familia Goya” — the great Goya family. And these people, we didn’t — we haven’t been back to work because we never stopped. We never stopped working. We doubled our efforts. And I asked the guys and gals, and I said, “Hey, this is tough.” And they said, “Look, if we don’t do it, nobody will.” And they said, “Presente.” The said, “Count on us.”…

Transcript via the White House:

Our company was founded in 1936 by my grandfather, who left Spain at only 18 years old. Did not know where he was heading, but he was heading and looking for opportunity and prosperity, and he found it in this great country.

Today, our company is a multi-billion-dollar company with thousands of employees and with