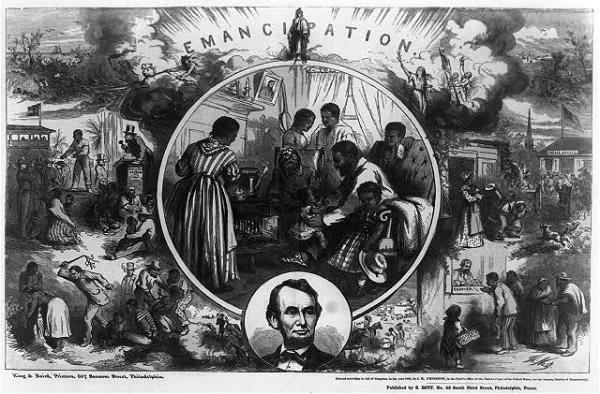 Democrats continued for decades to discriminate against blacks. In fact, the KKK, was founded as the the terrorist wing of the Democrat Party.

Hinds represented Arkansas in the United States Congress from June 24, 1868 through October 22, 1868 before his death.

The Ku Klux Klan was founded as the activist wing of the Democratic Party.

On September 28, 1868, a mob of Democratsmassacred nearly 300 African-American Republicans in Opelousas, Louisiana. The savagery began when racist Democrats attacked a newspaper editor, a white Republican and schoolteacher for ex-slaves. Several African-Americans rushed to the assistance of their friend, and in response, Democrats went on a “Negro hunt,” killing every African-American (all of whom were Republicans) in the area they could find. (Via Grand Old Partisan)

Democrats in hoods slaughtered hundreds of Republicans and blacks across the country.
They beat and threatened and murdered Republicans for standing up for the black man.

The last KKK official to serve in Washington DC was former Senator Robert Byrd, a KKK kleagle. Byrd was a top Democrat and friend of Joe Biden.

In fact, throughout the Civil Rights era of the 19th and 20th century Democrats fought against freedom and rights for the black man.

The only blip of positive blip of news during the 19th Century for Democrats was the long-forgotten Juneteenth celebration. After the Great Emancipator Abraham Lincoln was murdered by a Democrat his successor Andrew Johnson sent US troops to Galveston to free the slaves there in Texas who were not yet released.

This is the only bright spot for Democrats today in the entire history of civil rights in the 19th and most of the 20th centuries.

That’s why Democrats made it a national holiday.
They had to.

All the rest of their history is all about racism, murder, lynchings, and Jim Crow laws.

Here is a brief history of the end of slavery and emancipation in the United States.