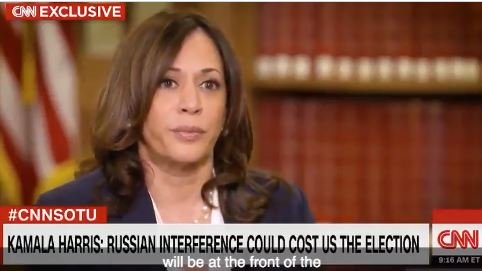 Here we go… Kamala Harris is already pushing the junk conspiracy that Russia may prevent Joe Biden from winning the presidential election.

Is there ANY foreign adversary who would NOT want Joe Biden to win the election? Well, besides Israel. Every other US competitor or foe would LOVE to deal with old senile Joe and his party of America haters. Who are these people fooling?

Kamala Harris dropped this disgusting excuse Sunday in an interview with Dana Bash on CNN.

Kamala Harris: And I do believe that there will be foreign interference in the 2020 election and that Russia will be at the front of the line.

Dana Bash: Could it cost you the White House?

This is a party that is completely untethered from reality.

Kamala Harris says “Russian interference” could cost the Biden campaign the election. If Russia has anything to do w/ costing Democrats the 2020 election, it will be because they’ve spent four years spewing unhinged Russiagate paranoia to excuse losing the 2016 election. pic.twitter.com/fvJP9csvYn