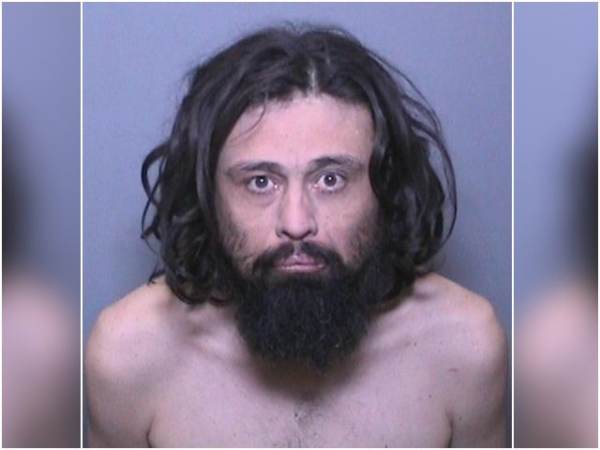 Rudy William Grajeda Magdaleno, 39, was one of the seven “high-risk” sex offenders and child molesters released from a prison in Orange County by Court Commissioner Joseph Dane due to the Coronavirus.

Magdaleno was rearrested on sex crimes this week just two weeks after he was released from prison in Orange County.

Magdaleno has a significant documented criminal history of sex crimes and his previous convictions include child molestation, indecent exposure, assault, battery, criminal threats and other charges.

“I find it extremely troubling that this high risk sex offender was authorized for release, in spite of his significant documented criminal history,” Santa Ana Police Chief David Valentin said.

Magdaleno failed to charge his GPS monitor just one day before he was rearrested for exposing himself at a parole resource center.

A high-risk registered sex offender was arrested Thursday for allegedly exposing himself at a parole resource center, just two weeks after a controversial early release from the Orange County Jail.

Seven inmates who were deemed high-risk sex offenders were released early in April by a court commissioner, triggering criticism and warnings from county law enforcement officials who said the release was not necessary because the jails were not overcrowded.

One of them was Rudy William Grajeda Magdaleno, who was released April 13 after serving 71 days in jail on a 180-day minimum sentence. Officials say he has an extensive criminal history including convictions for robbery, narcotics possession, criminal threats and child annoyance.

Santa Ana police say Magdaleno was at a parole resource center on April 17 when he exposed himself to staff members there. He had also failed to charge his GPS monitor and the device had stopped tracking him the day before.

“These kinds of high-risk sex offenders are the most dangerous kind of criminal and the most likely to re-offend,” District Attorney Todd Spitzer said in a statement. “They are doing everything they can to avoid detection by the parole officers assigned to monitor them so they can potentially commit additional sex offenses. These are not the kind of people who should be getting a break.

“These inmates were released by court order, and are not in any way connected to the measures I have taken to limit the spread of COVID-19 in the Orange County jail,” Sheriff Barnes said in a statement this week. “I oppose effort that excuse criminal behavior and jeopardize the safety of our community.”

Please see below for my statement clarifying information that was reported inaccurately. pic.twitter.com/spuD5N3ixg

Welcome to 2020 where sex offenders and child molesters are being released from prisons while law-abiding Americans are being arrested, harassed and fined for peacefully protesting and going to church.