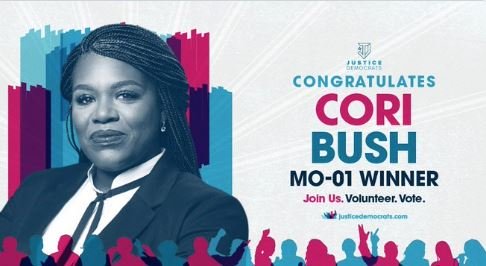 There was a HUGE UPSET tonight in the Missouri Democrat Primary.

I’m not sure people understand how enormous of an upset it is for @CoriBush to defeat Lacy Clay.

She’s a nurse who’s never held elective office. She doesn’t know rich people she can call for big checks. She didn’t moderate her stances to accommodate the status quo.

@CoriBush thanks @BernieSanders during her victory speech:

“Let me also thank somebody who stood with me that did not have to stand with me, [somebody] that you all probably know very well — I gotta call out Senator Bernie Sanders.” pic.twitter.com/WDKsoY7OwJ

We can’t quite believe it, but TOMORROW is election day!

See you at the polls

Missouri has a Black Congresswoman. @CoriBush is the FIRST Black woman Missouri has sent to Washington DC. EVER.