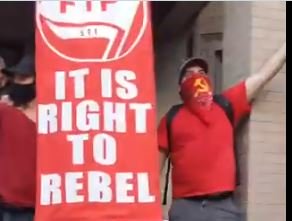 Krewson read off their names and addresses in a Facebook live broadcast.

You can’t unring this bell Mayor @LydaKrewson . The harm you caused these constituents by maliciously doxing them on Facebook is proof that you are unfit for office. RESIGN. pic.twitter.com/pw93ksPv7L

Now the mob wants her gone!

On Sunday HUNDREDS of Violent leftists and Communists converged on her home in St. Louis City.

There are hundreds of these godless leftists out on the street in front of her home.

The neighbors came out with guns.