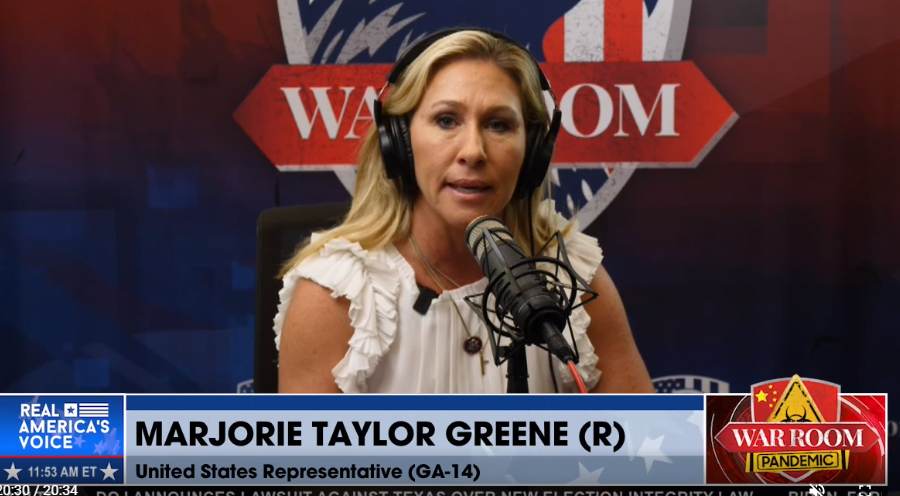 Rep. Marjorie Taylor Greene went off on a Black Friday tweetstorm against Minority Leader Kevin McCarthy and the other GOP turncoats.

Greene called out McCarthy for his continued support for toxic Liz Cheney and Adam Kinzinger. She also called out RINO herd leader Rep. John Katko for voting for Pelosi-Biden agenda.

As usual Marjorie Taylor Greene did not back down.
And she put into words what millions of GOP voters are thinking about Kevin McCarthy – a total flop.

1.) I waited a week to see if action would be taken, after 13 Republican traitors voted to pass Biden’s agenda before speaking publicly.

Nothing happened. Well not exactly.

Dr.Paul Gosar got kicked off committees for a cartoon, and Liz Cheney and Adam Kinzinger voted for it.

2.) Remember, 11 “R’s” voted with D’s to kick me off committees supposedly for social media post well before I even ran for Congress, and I was publicly chastised by the GOP Leader several times for my words. But I don’t back down & always keep fighting, & have the People’s support.

3.) Committees are useless in the minority & everyone knows it bc Republicans have stopped nothing.

I’ve been far more effective without them.

But Republican traitors have hurt us.

Without 19 R Sen & 13 R House Members, there would be no Infrastructure or BBB bill right now.

4.) The worst of the unlucky 13 is Rep John Katko. He lied to the GOP Leader and voted right away for the Infrastructure bill just as soon as the vote started, opening the door for the other 12 turncoats to help Pelosi beat the Squad & pass Biden’s agenda.

5.) McCarthy, Scalise, & our entire conference worked to get everyone to vote NO to the Infrastructure bill bc we all knew that bill was tied to the BBB bill, which is full passage of Biden’s agenda & the Green New Deal. 6 Dems bravely voted NO, but Katko led 12 R’s to vote YES.

6.) Remember, the Progressives said the Infrastructure & BBB bill were tied together, “lock and key.”

7.) All the while, the 2 worst members of our House GOP conference take their marching orders from Nancy Pelosi on her witch hunt J6 committee.

Rep Liz Cheney and Adam Kinzinger scheme with Democrats on how to destroy Trump & his allies, while still being members of our