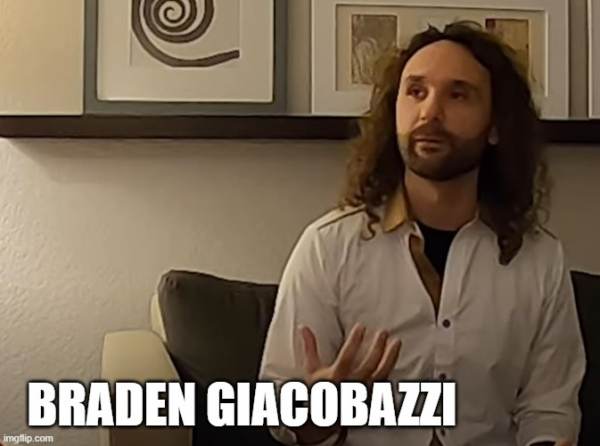 ANOTHER MICHIGAN WITNESS TO VOTER FRAUD!

Braden Giacobazzi witnessed the aftermath of the BIDEN BALLOT DUMP in the middle of the night. He was told that 35,000 ballots had just arrived at the TCF Center and asked if he could help ensure the votes were legally authenticated and counted.

When he arrived and tried to do his job, Democrats threatened violence

“I will kick your ass or I will kick you out of here!” was the threat of violence used to eject Braden from reviewing legal and illegal ballots at the TCF Center.

The media keeps saying there is NO EVIDENCE of Voter Fraud, but there are dozens of witnesses and hundreds of affidavits alleging voter fraud in Wayne County/Detroit ALONE!

He is a Political Independent and was a Detroit Poll Challenger.

“When you walked in you could feel the tension in the air.”

“My job was to look at ballots and make sure the numbers matched each other,” he said. “It was going so fast you couldn’t see who was voting for whom.”

“We were told by the lawyers that we were supposed to be able to view the ballots, but the people at the tables never let us.”

Giacobazzi noticed when the facility decided to lock out the Republicans from being able to observe the vote count. From that point on, things got “more and more contentious.”

He told The Gateway Pundit that the atmosphere devolved into a one-sided cover-up throughout the day. “Many of the people running the tables– as soon as we’d step in, they would wield COVID as a weapon to force you to stay away from the table.”

“They were professional agitators, riling people up in order to get people kicked out.”

“And they’d step in front of you to make sure you couldn’t see what was going on.” He described being yelled at by numerous left-wing operatives who demanded to know who he was, despite his credentials.”