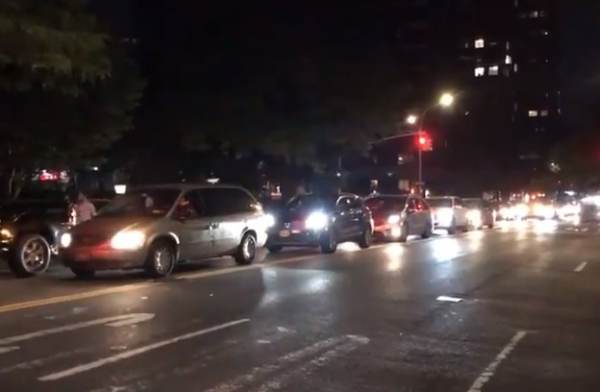 New Yorkers are fed up with Mayor Bill de Blasio allowing the lawlessness continue on their streets, which includes shooting off fireworks at all hours of the night.

To enact their revenge, protesters lined up their cars and held down their horns for a noise demonstration outside the Gracie Mansion late Monday night.

The New York City Police Department has reportedly asked New Yorkers to stop calling 9-1-1 and 3-1-1 to complain about the blasts.

The police do nothing. This goes on all night in Brooklyn. The police have asked people to NOT call 311 & 911! pic.twitter.com/xt8aUOwkpq

Since de Blasio refuses to do anything about the insane noise keeping them awake, members of the Jewish community decided to organize a demonstration to make sure the mayor couldn’t sleep either — and it was LOUD.

Hundreds are protesting outside Gracie Mansion in #Manhattan right now after @NYCMayor refuses to do anything about the insane fireworks the last few weeks plaguing NYC. Residents can’t sleep, so they decided to not allow Deblasio to sleep tonight either. pic.twitter.com/Kom1X7PTPM

The fireworks have been going on nightly in Brooklyn and other communities. In one particularly horrifying video from Harlem, a criminal degenerate threw a large lit firework at a sleeping homeless man.