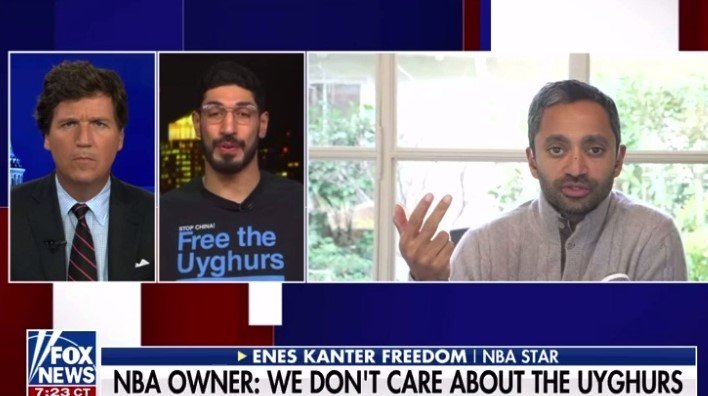 This past weekend, Chamath Palihapitiya, a part-owner and director of the NBA’s Golden State Warriors and the founder and CEO of Social Capital, disregarded China’s human rights abuses against Uyghur Muslims in a podcast interview.

Chamath Palihapitiya: “Nobody cares about what’s happening to the Uyghurs, OK? You bring it up because you really care and I think it’s nice that you care. The rest of us don’t care. I’m just telling you a very hard, ugly truth. Of all the things that I care about, yes, it is below my line.

Chamuth, who pretends to be woke and sensitive to human rights, could not give a rat’s ass about the persecuted Chinese minority.

On Monday night NBA player Enes Kantor Freedom joined Tucker Carlson to weigh in on Palihapitiya’s comments about the Uyghurs. Enes posed this question to the West Coast billionaire.

Enes Kantor Freedom: “The only thing he cares about is money and promoting the CCP propaganda. And it makes me sick how he is using social justice to make money for his company. And I want to ask him one question, one question, if your mother, if your daughter, if your sister was in those concentration camps and getting tortured and gangraped every day would you still think about money? Would you still remain silent?”