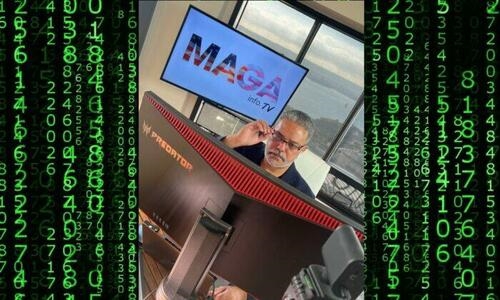 Authored by Patricia Tolson via The Epoch Times (emphasis ours),

The developer of a social media monitoring algorithm explains how his internet sting operation “J6 DELETED” exposed how Twitter manipulated the narrative “in real time” on Jan. 6, 2021.

In 2018, Jason Sullivan—a social media and Twitter specialist—was subpoenaed by the special counsel investigating the now-debunked theory that Trump was colluding with Russia. Sullivan is now the lead investigative consultant to former President Donald Trump’s legal team, via Peter Ticktin. In an exclusive interview with The Epoch Times, Sullivan explains how he discovered evidence of a coordinated operation by influencers and Twitter to set the narrative on Jan. 6, 2021, as events unfolded.

“We’ve created an algorithm that enables us to determine which tweets are on a trajectory of becoming a viral event,” Sullivan explained. “We are watching social media intelligence in real-time, all day, every day, based on specific search terms, key phrases, and hashtags. Our algorithm can tell us exactly how much traction a particular tweet is receiving and how often people are reciprocating, such as liking and retweeting. When it meets a certain threshold, we are automatically alerted.”

As Sullivan noted, “the one who drives the narrative, drives the outcome.”

“What we discovered is that many of these captured tweets, which had exculpatory evidence, had been conveniently and systematically removed from Twitter and some of the pages have even been scrubbed from the internet,” Sullivan recalled. So too had the communications feeds and comments within the viral threads, which contained additional exculpatory evidence.

“I want to make it perfectly clear that we conducted this sting operation,” Sullivan asserted. “We have it all. We have all of the tweets and all of the exculpatory evidence Twitter thinks it scrubbed from the internet. We have them all.”

The collection of all viral tweets captured by his algorithm—J6 DELETED—is now available to the public.

According to Nashville Film Institute, “Social media influencers” are “digital creators with a large social media following,” who “spark dialogues, set trends, and generate interest among their fan communities.” Among the dozens of influences who were active on Jan. 6, several stood out as leaders in pushing what Sullivan calls “the false flag narrative.”

Aaron Rupar, an associate editor at VOX, initiated no less than 18 viral Twitter posts on Jan. 6.

Investigative journalist Lara Logan has worked closely with Sullivan and has seen his trove of tweets captured by his algorithm. She knew immediately that Rupar was spreading misinformation. In particular, she knew Rupar’s claim that Trump attacked “four black people within 30 seconds” when speaking about Stacy Abrams and Oprah Winfrey “had absolutely nothing to do with race.”

During Trump’s speech on Jan. 6, he mentioned Abrams twice near the halfway point and twice near the end. All references were related to her failed campaign to become governor of Georgia. Trump also mentioned Winfrey, twice, once saying Oprah “used to be” a friend of his and then how he “didn’t notice there were too many calls coming in from Oprah” after he became president.

Rupar is so well known for his history of spreading misinformation and false narratives that on March 21, 2021, the Urban Dictionary unveiled a new verb, “rupar.” It means “to lie with impunity; a brazen statement with a focus on misleading, usually with intention of a predetermined outcome.”

Social media influencer MeidasTouch had 14 tweets go viral on Jan. 6. According to Open Secrets, MeidasTouch, a “Democratic/Liberal” Super PAC based in Macomb, Michigan. According to the Federal Election Commission, the largest disbursements appear to primarily benefit Prestige WW Inc., “founded in 2020 to help progressive candidates and organizations stick it to Trump and his enablers online” and the PACs founding brothers, Jordan and Bret Meiselas.

In the meantime, attorney and Harvard Professor Laurence Tribe was responsible for eight viral Twitter posts on Jan. 6, primarily to insult and berate Trump.

According to Logan, Tribe is also “one of the biggest architects of the whole insurrection narrative, both publicly and behind the scenes.”

Along with helping push the “false flag narrative” as an influencer on Jan. 6, Tribe has been a key influencer in pushing the narrative that Trump should be indicted. Tribe also used social media on Oct. 13 to advise Attorney General Merrick Garland that “it won’t be enough … to approve indictments of Trump related to Mar-a-Lago & obstruction. [Garland] will have to approve indictments for trying to overthrow the election, seditious conspiracy & insurrection.”

A day earlier, Tribe appeared on MSNBC, suggesting how many crimes Garland could indict Trump with.

While Sullivan noted that “every person listed in J6DELETED is an influencer because every single one of those 1,058 tweets were considered viral events,” he also pointed out that the only posts that were deleted by Twitter were those on the conservative side. Along with the influencers, he said there were also “coordinators,” people “using similar language in their tweets to perpetuate the chosen narrative.” Words like “seditionist,” “fascist,” “insurrectionists,” and phrases like “clashed with police,” “stormed the Capitol,” “terrorist coup,” and “domestic terrorists” were promoted.

Asked if he believes the influences and coordinators will be nervous when they learn that their activities are being monitored and exposed, Sullivan said, “I think they better.”

The Epoch Times reached out to Rupar and Tribe for comment.

While liberal influencers pushed the narrative that Trump instigated a deadly insurrection and his supporters were violently storming the United States Capitol, anyone who posted anything that conflicted with that narrative had their posts deleted and their accounts shut down.

Elijah Schafer posted that “Trump supporters have breached the Capitol building …” In response, Tracy Beanz said, “I don’t know that these are necessarily Trump supporters … But holy hell.” In a similar post by BNO News, Beanz said “These don’t look like Trump supporters to me.” As liberals began posting that Trump supporters were clashing with and pepper spraying police around 10:45 a.m. (PST), Beanz noted 10:53 a.m. (PST) that “The Trump crowd HAS NOT reached the capitol yet.” All of her posts were subsequently deleted and her account was suspended.

The Election Wizard said he “would not be surprised if a number of Trump Supporters clashing with police are Antifa in disguise.” His post was deleted and his account “doesn’t exist” anymore. For asking “who wears all black and attacks law enforcement,” the account of J Homes was also suspended.

Melissa Tate posted a video showing Trump supporters stopping suspected ANTIFA members from breaking Capitol windows. “Dems set us up & GOP just threw us under the bus over a trap,” she said. Her post was deleted and her account was shut down.

The account for Lrihendry is temporarily unavailable because it violates the Twitter Media Policy. The accounts for Cari Kelemen, Truth and ArtTV1, Gen. Michael Flynn, X22 Report, Sydney Powell1, TheReal Maddog58, Kevin McCullough/KMC Radio, Carlos Silva, Melissa Tate, and Awakened Outlaw were also suspended. These are but a few of the hundreds of silenced conservative voices.

The most notable victim of Twitter’s censorship on Jan. 6 was Trump himself.

“Future violations of the Twitter Rules, including our Civic Integrity or Violent Threats policies, will result in permanent suspension of the @realDonaldTrump account,” Twitter Safety added.

In the meantime, people like Reps. Nancy Pelosi (D-Calif.), Chuck Schumer (D-N.Y.), and even President-elect Joe Biden were demanding that Trump tell his supporters to stop and go home.

Sullivan also said the Jan. 6 Committee has had this information for months.

“The January 6 Committee contacted my attorney and asked for all of my email communications regarding January 6,” Sullivan explained, adding it included the posts deleted by Twitter. “We gave it to them, and now they voted to subpoena Trump, demanding that he provide evidence to defend himself against their allegations. I hope exposing this will encourage them to be more forthcoming with the evidence they received from me five months ago.”

According to Trump attorney Peter Ticktin, the truth is in the silence.

“If you want to know what truth is, just look at what you’re not allowed to say,” Ticktin, founder and Senior Managing Partner at The Ticktin Law Group told The Epoch Times. “In a free world, where we are allowed to have a voice, it doesn’t matter if someone makes up a lie because the truth will out. But if you need to hide truth then you have to censor everything and you have to erase people and eliminate their ability to say things.”

“It seems like that’s the example they want to live by in terms of how to run society,” Ticktin explained. “If you look at the January 6 unselect committee and you believe that the election was fair and that Donald Trump was pushing ‘the big lie,’ everyone but The Epoch Times is required to put that news out, including FOX and Newsmax. But if you show evidence like in 2,000 Mules, and how Twitter censored voices and deleted exculpatory evidence, there’s no doubt that the election was stolen.”

For the most part, Ticktin believes the majority of Trump’s base knows the election was stolen.

“We have eyes,” he said. “We aren’t willfully blind. That’s the biggest difference between the left and the right, willful blindness.”

According to Kirk Wiebe, “the Twitter experience that we’re seeing is not new.”

Wiebe and William Binney became National Security Agency whistleblowers in September 2002 when they exposed how the government was using a program called Trailblazer to illegally monitor all Americans.

“Twitter has removed tweets before. It has censored people before,” Weibe told The Epoch Times. “This is a censorship operation by the government working with Big Tech in classic fascist behavior. Whenever government colludes with big business to control people, which is what this is all about, it’s fascism, and I’m not sure the average reader understands that.”