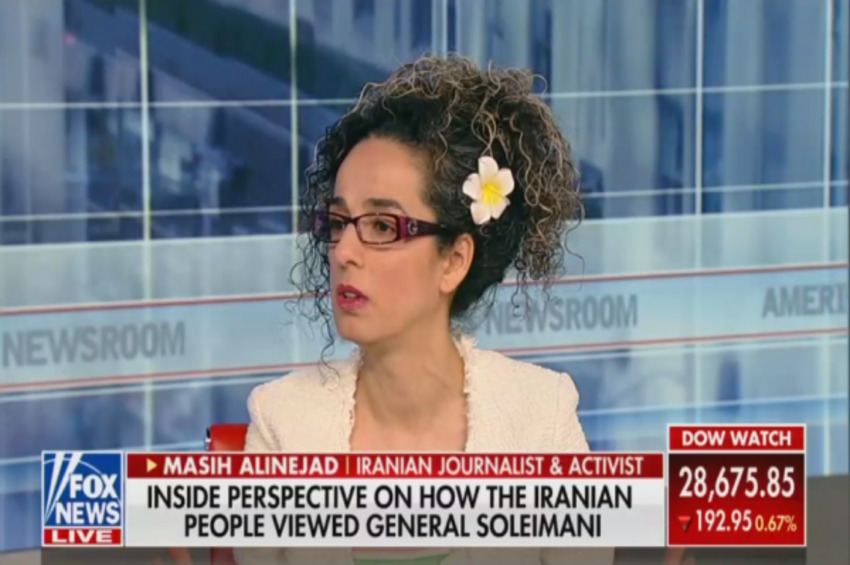 “Don’t believe Iranian propaganda about the mourning for [General Qasem] Soleimani.” That’s the message or plea from Iranian journalist and activist Masih Alinejad published by The Washington Post on Monday. Unfortunately, as NewsBusters reporting on the liberal media’s reaction to Soleimani’s demise has shown, they were not heeding her warning and were willingly becoming mouthpieces for the murderous regime.

While the liberal media were running around and claiming Iranians were “united” against the United States by Soleimani’s death, they were made to look like fools when the facts of his barbarism were laid on the table.

Alinejad began by recalling how the General was responsible for massacring his fellow countrymen after they protested the regime. “According to Reuters, more than 1,500 people were killed by security forces, including units of Soleimani’s Revolutionary Guard, and at least 7,000 have been arrested,” she reminded readers. “The Internet was shut down for five days. Tehran has yet to release official figures of its own, which suggests the death toll may have been even higher.”

Apparently, those protesters also had “harsh words for Soleimani and his foreign adventures” including his support for radical Islamic terrorists. The families of those slain protestors had to pay money to get their loved one’s bodies returned and were barred from having public funerals. The military was even rolled out to break up some funerals. Seems like the liberal media don’t care about those funerals.

On Monday, ABC News and CBS News gushed about the massive gatherings in the streets of Iran. ABC chief foreign affairs correspondent Martha Raddatz was moved by them chanting “Death to America,” while CBS foreign correspondent Elizabeth Palmer touted a message of death against Trump.

But Alinejad exposed what was really happening on the ground to get those crowds to turn out:

Without doubt, Soleimani had support among hard-liners and regime loyalists. The regime is not taking any chances, though. In the city of Ahvaz, where large numbers of people turned out to mourn Soleimani, the government has forced students and officials to attend. It provided free transport and ordered shops to shut down. According to videos sent to me by people inside the country, the authorities are making little kids write essays praising the fallen commander. First-graders who didn’t know how to write were encouraged to cry for Soleimani.

“Some Iranians have compared the funeral services for Soleimani to those held for the Nazi leader Reinhard Heydrich, the Butcher of Prague, killed by Allied agents during World War II,” she added.

Explaining how she knew about what many Iranians really thought about Soleimani, Alinejad said she had “received thousands of messages, voice mails and videos from Iranians in cities such as Shiraz, Isfahan, Tehran and even Ahvaz, who are happy about Soleimani’s death.” They also said they were being pressured to attend such gatherings.

Alinejad went after the media directly, calling out how they refused to speak with Soleimani dissenters and were more than willing to promote the regime’s claims:

There are many Iranian voices who think Soleimani was a war criminal, but Western journalists rarely reach out to them. Ironically, the Western media is more skeptical of such state-organized events in other countries, such as Russia or North Korea, but seems to leave its critical sense at the border when it comes to the Islamic Republic. While it’s true that Western correspondents face daunting conditions when it comes to reporting the truth from Iran, that shouldn’t excuse the many times they’ve shown unwarranted gullibility toward the official version of events.

Others in Iran who had loved ones killed by Soleimani had sent her “videos of themselves, speaking to the camera, dancing, or even sharing cakes and sweets.” That sounds more like a celebration than a country “united” in anger against the United States.