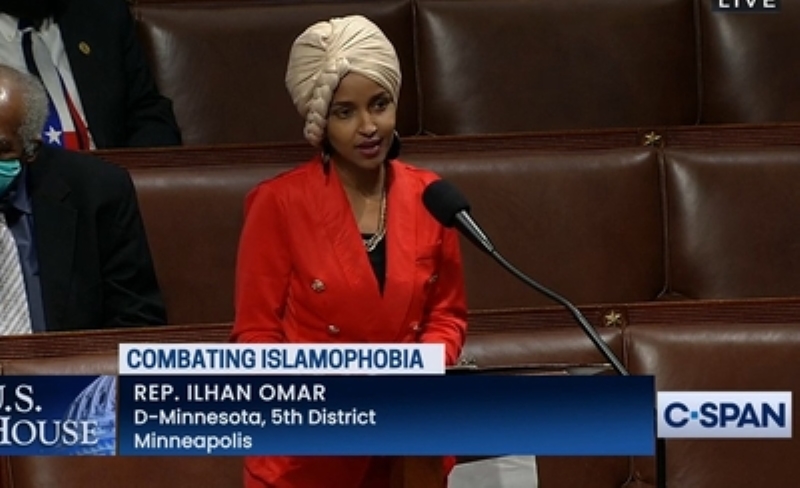 The Combating International Islamophobia Act, which appears stalled in the U.S. Senate, is receiving a new boost from the Council on American-Islamic Relations (CAIR), the U.S. Council of Muslim Organizations (USCMO) and other Islamist organizations. It was among the issues pushed last month when a coalition of Islamic organizations gathered in Washington D.C. to meet with elected officials and Congressional staffers.

The bill, introduced in October by U.S. Rep. Ilhan Omar, D-Minn., and U.S. Rep. Jan Schakowsky, D-Ill., would create a new special envoy to monitor and combat Islamophobia globally. It passed the House last December 219-212, with near-unanimous support from Democrats.

It has not moved in the Senate, however. It is an ambiguous initiative that could create more problems than the ones it aspires to address. If this bill becomes law, critics fear it will contribute to weakening U.S. support of Israel, and disable criticism of Islamist activities both abroad and in the United States.

In December, the White House issued a statement supporting the bill as a way to protect religious freedom. “The Administration strongly believes that people of all faiths and backgrounds should be treated with equal dignity and respect around the world,” it said.

But the bill as written does not ensure equal dignity and respect of religions.

“This bill doesn’t make it clear whether the term Islamophobia includes for example, criticizing radical Islamic terrorist groups or calling out the persecution of Christians,” Rep. Steve Chabot, R-Ohio, said before December’s House vote. “Is it Islamophobic to oppose unacceptably intolerant blasphemy laws or criticize those who call for the destruction of Israel? What about criticizing the Taliban’s brutal repression of women or condemning those who deny the Holocaust as Iran’s Supreme Leader has repeatedly done?”

Iranian journalist, author and women’s rights campaigner Masih Alinejad opposed the bill in a January Washington Post op-ed, saying that it “might be creating precedents that could undermine our freedom to speak out.” The bill is too vague, with no clear definition of what constitutes Islamophobia, wrote Alinejad, who was targeted for kidnapping by Iran’s Islamist authoritarian regime last year. “Is criticism of the Taliban a form of Islamophobia? What about criticism of the Islamic Republic of Iran? Can one criticize Hamas or Hezbollah as terrorist organizations?”

Other Iranian dissidents worry about the bill’s effect on free expression.

Interestingly enough, the idea of an office to monitor Islamophobia worldwide has been promoted in the last year by both Turkey and Iran. Turkey is an unlikely candidate to stand out against discrimination given President Recep Tayyip Erdogan’s problematic record of human rights’ abuses and its support of the Muslim Brotherhood. The Brotherhood’s ultimate ambition is a global Islamic state.

The SETA foundation, a semi-official Turkish think tank with Muslim Brotherhood links, drafted the European Union’s 2018 report on Islamophobia, an example of the infiltration of Islamist ideas in official circles. Turkey launched coordinated diplomatic efforts to promote its propaganda on Islamophobia in mid-2021. Last September, Erdogan declared that Turkey will launch a political initiative to combat Islamophobia in the West, saying that it “has turned into a trend that disrupts Muslims’ daily lives and threatens social peace.” In February, Turkey hosted a conference with Pakistan and Malaysia, aiming to promote the image of an intolerant, Islamophobic Western world. In June, Turkish authorities aimed to silence critique against Turkish organizations in the Netherlands by equating critique of the Islamist Turkish circles with “Islamophobia.”

Interestingly enough, some supporters of the U.S. bill also share ties with Turkey. The U.S. Council of Muslim Organizations (USCMO) is regarded by Ahmet Yayla, a 20-year veteran of the counterterrorism and operations department in the Turkish National Police, as “working closely with Erdogan.”

Ilhan Omar’s excellent relations with the AKP regime of Turkey are well-known and documented by think tanks and other analysts (here, here and here). She met Erdogan in a “closed-door meeting” in New York back in 2017 when Omar was still relatively unknown. Since then, Omar has received generous support from Turkish-state run media. TRT World has run numerous stories in support of Omar. Both the state-run Anadolu news agency and the Erdogan-friendly Yeni Safak ran an article in 2019 describing Omar as the victim of a “media lynching campaign.” It urged readers to donate to Omar’s campaign as “an adequate way of denying powerful organizations the power to censor alternative voices.” At least one Turkish-American advocacy group has donated to Omar’s political activity. Iran’s officials have also been vocal in promoting the image of an “Islamophobic West.”

In essence, the Islamophobia Act institutionalizes the undefined, non-legal concept of Islamophobia, while at the same time actually promoting the same distorted narratives put forward by the authoritarian regimes of Iran and Turkey. Secular think tanks have raised concerns about the vagueness of the very term. In a detailed 2019 report, the British group Civitas tapped secular, religious and academic voices to critique a recent attempt to draft a definition of Islamophobia. They shared the concern that codifying the term could pose “a danger to civil liberties in the United Kingdom, particularly freedom of expression, and journalistic and academic freedom.”

Other scholars have asked in analyses for the possible substitution of the term with other more fitting examples, as “Islamo-prejudice.”

If passed as is, this bill is likely to create a lot of problems. Would publishing images of Islam’s prophet Muhammad be considered a matter for the U.S. State Department’s intervention? Will Israel’s and other Western states’ potential actions against Islamist terror groups be labeled “Islamophobic?” These are not just hypothetical mental exercises. In fact, such incidents have already happened.

When a CAIR official accuses Jewish organizations of driving “a well-funded conspiracy” to push “Islamophobia,” her bosses say her critics are not just mistaken, but are “smearing Muslim leaders who support Palestinian human rights.” When allied European nations impose bans on the hijab at work or in other public settings, would the State Department envoy be expected to act?

Fighting bigotry is necessary and noble. But the Islamophobia Act could be used to curtail free speech in the United States and worldwide, undermining the fight against resurgent Islamist terrorist activities and weakening established U.S. ties and cooperation with Israel. As Jonathan Tobin of Jewish News Syndicate has already eloquently pointed out in an op-ed, “the State Department doesn’t need a new office whose real purpose will be to defend anti-Semites rather than countering religious persecution.”

RE- posted with permission