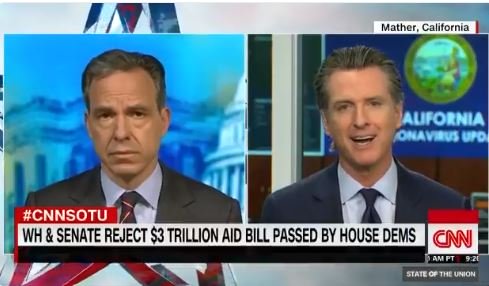 The Golden State is still in lockdown under Newsom’s iron fist despite the low number of coronavirus deaths in the state.

But Newsom wants his fellow Americans to fork over the cash or he’ll start laying off police, firefighters and other first responders.

California Gov. Gavin Newsom says first responders will be the “first ones laid” off unless federal bucks arrive in the Golden State in the near future.

The Democrat appeared to be playing a political game of chicken with Republicans in Congress over the weekend during a discussion about the coronavirus pandemic with CNN’s Jake Tapper.

Mr. Newsom specifically had a message for Senate Majority Leader Mitch McConnell and other Republicans when asked about a $3 trillion relief bill being “dead on arrival.

CA Gov. @GavinNewsom says his state’s budget deficit is directly related to the coronavirus pandemic and federal funding should not be looked at as charity, “when it’s fundamental purpose of government is to protect people’s safety and to protect their well-being.” #CNNSOTUpic.twitter.com/9XpDngudxV