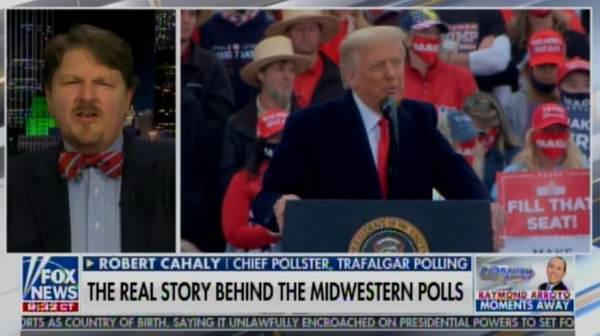 Trafalgar Polling correctly predicted Michigan and Wisconsin would go for Donald Trump in 2016.

And today he still feels the same way.

According to the latest Trafalgar Polling President Trump holds a 3.4 point lead over Joe Biden in Michigan.

President Trump also holds a lead over Joe Biden in Florida and Trump is less than two points behind Joe Biden in Nevada.

Robert also had this shocking news on Hispanic and Black voters this year.

Robert Cahaly: What we’re seeing with the Hispanics, the blacks and now the youth vote is starting to move. The Hispanic numbers in both states is 41 for Trump and the African American number in Nevada was 20 and 27 in Florida.

These are HUGE numbers for President Trump!

And also Evangelicals are turning to Trump in larger numbers (79%) than in 2016!

79% of white evangelical likely voters are supporting Trump — which is 9 percentage points higher than his support among this group at a comparable point in the 2016 election cycle, according to PRRI’s American Values Survey from September. https://t.co/NfEwPpgF8V

Trump is up in Michigan.

Trump is up in Florida.

Trump is up in Pennsylvania.