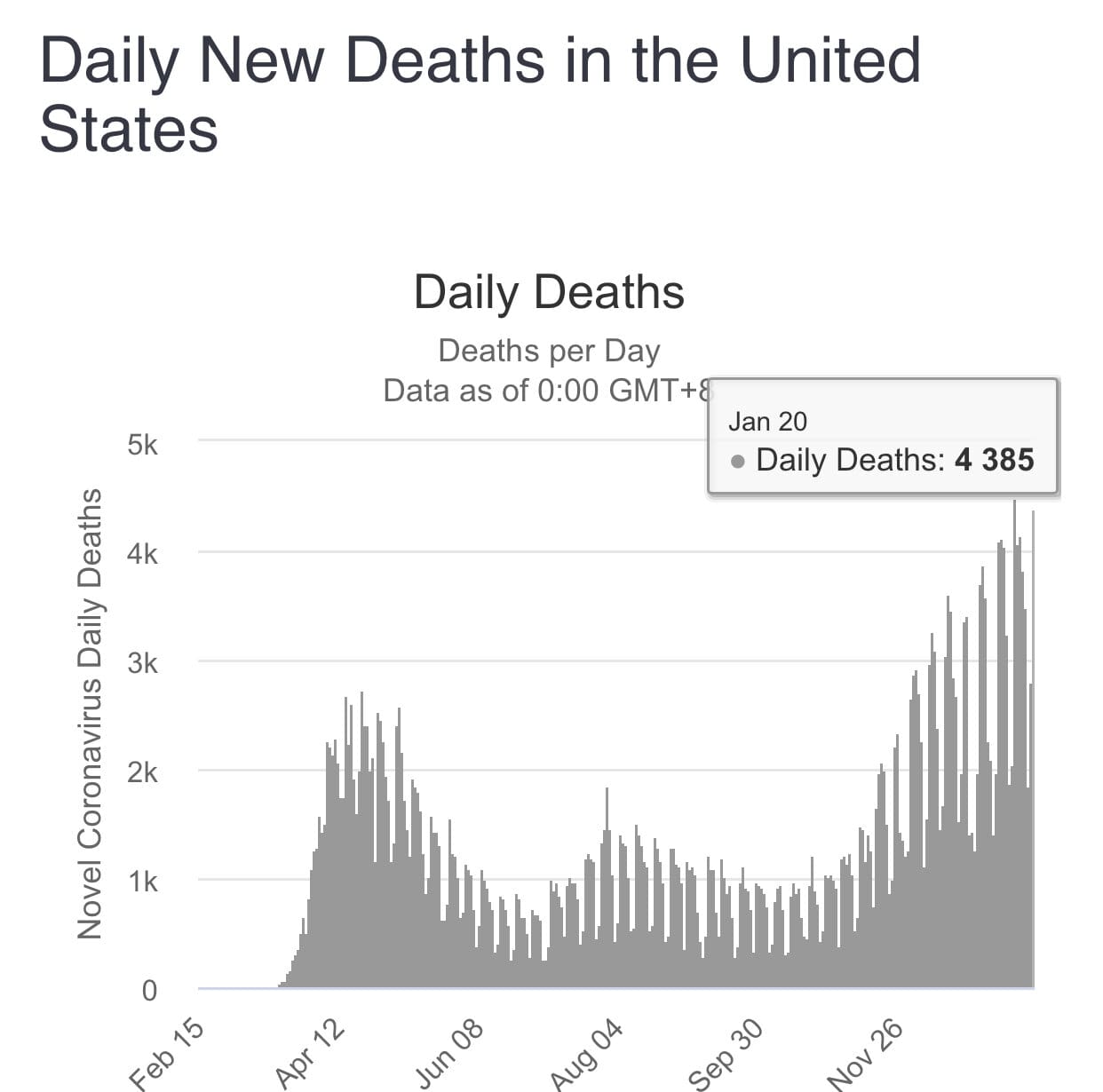 Many on the radical left hold the belief that Donald Trump is personally responsible for the all the deaths caused by the Chinese Wuhan Coronavirus over the past year.

In fact, Joe Biden himself claimed during a CNN townhall in September 2020 that “all the people would still be alive” if Trump had done a better job.

We here at The Scoop have decided that it is fitting to hold the Biden Administration accountable to the same exact degree that many in the mainstream media held Trump accountable.

So lets look at at how Biden is doing so far on his first day according to worldometers:

On January 20, 2021, the Chinese Wuhan Coronavirus death toll in the U.S. was 4,385; this was the second deadliest day on record in the U.S. for COVID deaths.

Ironically, (or perhaps predictably depending on how you look at it), many Democratic governors and mayors who have long pushed for total economic shutdowns are now calling for the economy to reopen, even as the 7-day average for Coronavirus deaths is near the all time high.

New York Democrat Governor Andrew Cuomo, whose remarkably stupid policy of sending COVID patients into nursing homes resulted in New York suffering more COVID deaths than any other state, tweeted, “We simply cannot stay closed until the vaccine hits critical mass.  The cost is too high.  We will have nothing left to open.  We must reopen the economy, but we must do it smartly and safely.”

We simply cannot stay closed until the vaccine hits critical mass. The cost is too high. We will have nothing left to open. We must reopen the economy, but we must do it smartly and safely.#SOTS2021

Chicago Mayor Lori Lightfoot, who once infamously threated to “arrest” Chicagoans who violated her stay-at-home order, now says that bars and restaurants need to reopen “as quickly as possible.”

Mayor Lori Lightfoot says Chicago restaurants and bars need to be allowed to reopen “as quickly as possible” to cut down on instances of private parties where people don’t take proper precautions against COVID-19. https://t.co/EC4Df2tFs7

In Sacramento, California, the state’s capitol, officials said conditions have improved enough to lift stay-at-home orders.  However, on January 20th, California had the most China virus deaths in the entire country with 590.

One region of California, the area around Sacramento, has improved enough to lift a strict stay-at-home order and allow some businesses to