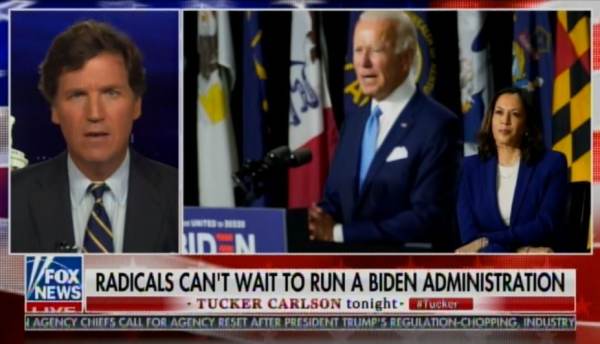 On Wednesday night Tucker Carlson went off on the radical Democrat Party and their cohorts in the liberal media. The left has been cheering on the mob and coddling the looters and rioters for months now. Cities across the country have been burned, looted, destroyed by leftist rioters.

MUST SEE! Media Is HIDING This: Look at Mass Destruction in Chicago, NYC, Minneapolis and St. Louis After Just One Week of Leftist “Peaceful Protest” (SHOCKING VIDEO)

The Democrats in power say nothing.

Tucker Carlson: “The question is we’re all assuming that if Joe Biden gets elected this will stop because clearly these are militia being used by the Democrat Party to win an election. But will it stop if Biden is elected? Will Biden be able to stop it even if he tries? Will he have any power at all?… The country is not movable. It’s not just an idea it’s a physical place, 330 million people live here and have lived here happily for the most part for centuries. And now a small group of unhappy people is wrecking it. And no one is stopping them. This isn’t about who gets elected in the next presidential election. It’s about if you’re going to want to live here at the end. So it’s time to stop lying about what’s happening, start telling the truth and demand an end to this nonsense.”

This was a great segment by Tucker Carlson.