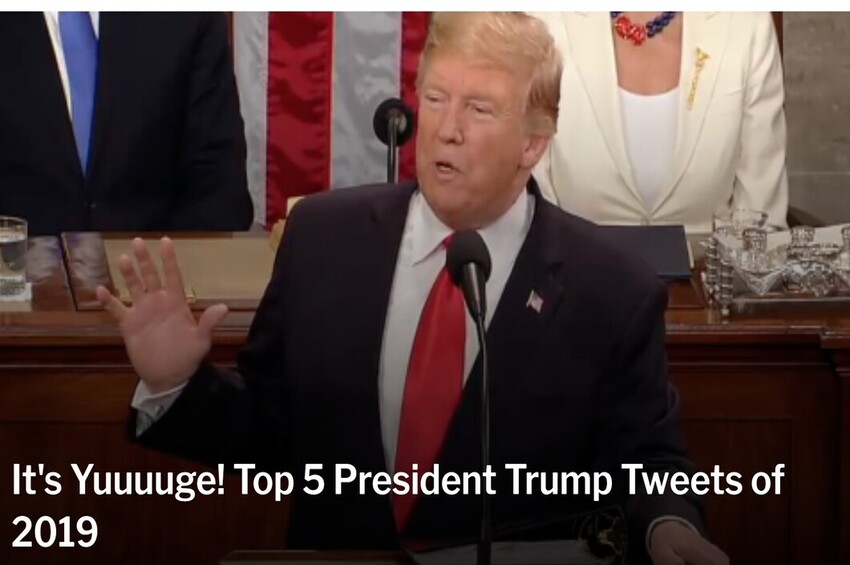 President Donald Trump tweets…a lot! Obviously, it would be incredibly difficult to try and narrow down a top list to only five of his tweets, but that’s exactly what we’ve done. Of course, you could come up with multiple top five lists of Trump’s tweets and all of them would probably have a case to be in the top five. This is ours. Let us know in the comments about your favorite Trump tweets of 2019!

Coming in at number five is a tweet thread from June 3rd. Trump was visiting the U.K. and got into a war of words with the ignorant-to-actual-crime mayor of London, Sadiq Khan. I’ll just say that I included this tweet simply in appreciation for the level of trash talking carried out by Trump on not only Khan, but also to New York City Mayor Bill de Blasio. 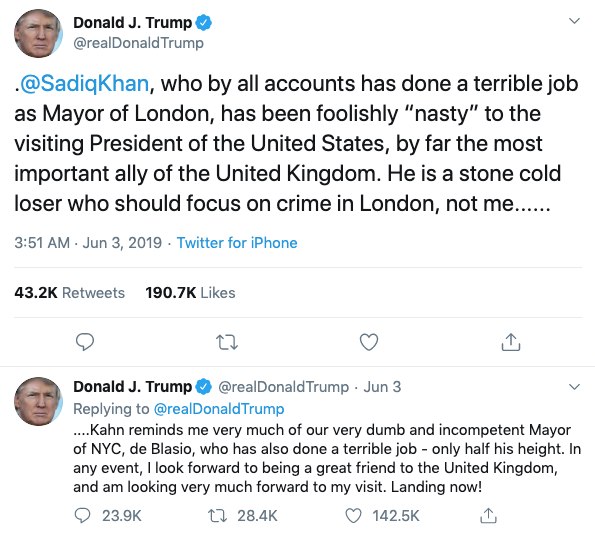 Some may not like the way Trump comes across in this tweet, but he showed absolutely no shame in his game with this one. Trump visited, there were no international incidents, and everyone went about their day despite the best efforts of the media.

Activist Rep. Rashida Tlaib (D-Mich.) got backlash from Trump for playing games with Israel about a visit to supposedly see her grandmother. Tlaib had written a letter to Israeli officials to allow her to visit her grandmother, to which Israel agreed. As soon as they agreed to allow Tlaib’s visit, Tlaib rebuffed the trip and tweeted out that she wouldn’t “allow the State of Israel to take away that light by humiliating me & use my love for my sity to bow down to their oppressive & racist policies.”

That’s a pretty low move to use your own grandmother to advance your partisan politics, which some have at times considered anti-Semitic.

Not to be outdone, Trump took to Twitter himself to bring a little levity into an otherwise needlessly divisive situation – all at the expense of Tlaib. 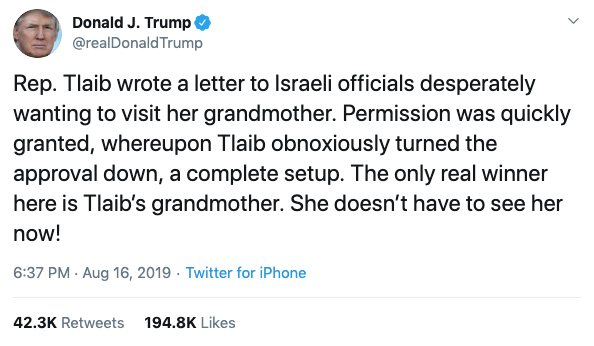 Ouch! That is what people in the comedy business call a “zinger.”

Ah, Greta Thunberg. Despite people’s initial outrage over her outrage, the teenage climate change alarmist has essentially become little more than a meme for people who can see through the whole manufactured charade.

That brings us to our number three Trump tweet of 2019.

Thunberg was speaking at the United Nations (UN) back in September, and she gave one of her more particularly angry rants about we’re all going to die because of climate change and that adults should be ashamed of themselves for ruining her childhood.

I mean, her parents kinda did that, but who’s keeping count?

Anyway, President Trump – in all his Twitter troll glory – sent out a tweet of Thunberg’s comments along with a caption that was guaranteed to tick off the predictably angry left and the media that propagandizes Thunberg. 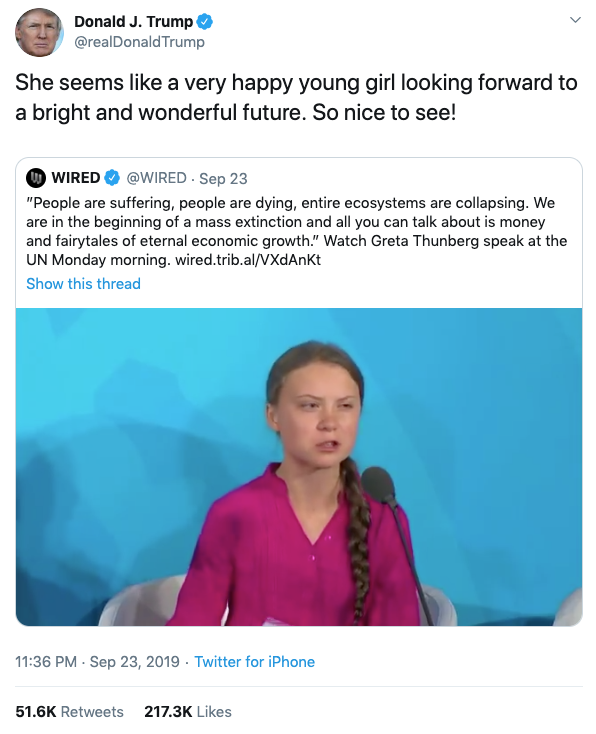 That response from Trump is so American – and I mean that in a very good way. No one does sarcasm like Americans, and Trump proved that in this instance in spades.

The final two tweets on this list don’t need much of a description. They’re just flat-out funny – for more than one reason. They’re funny because they’re clearly jokes, and they’re also funny because the left – especially in the media – can’t take a joke. They lost their collective minds over the final two tweets we’ve got for you, which brings us to the number two Trump tweet of 2019.

Whether you think Trump was serious or not about this, the media definitely pounced on the story of the president supposedly contemplating “buying Greenland” for the U.S. Even if Trump was serious and eventually ended up having the U.S. buy Greenland, I still would’ve seen it as a joke – something Trump did just to mess with people.

Amidst all the furor over Trump, even CNN’s Jim Acosta wrote about the possible sale just so he could tell Trump through an article that Greenland wasn’t for sale.

Trump decided, once again, to bring a little humor into the situation by tweeting a picture of some Greenland coastline with a huge Trump tower plopped right in the middle of it all. Even Trump knew it looked so absurd that surely the majority of people with half a braincell would take it as a joke. 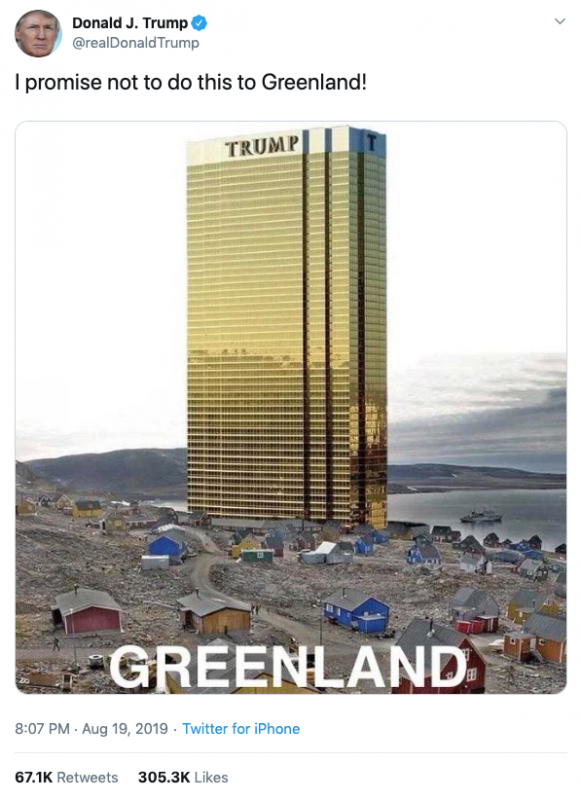 Come on! How could you not take that as funny? But, right on cue, the leftist media just used the joke as another way to take a shot at Trump.

Oh well, at least we still have a sense of humor about it.

Number one really needs no introduction as there was no explanation for this November Trump tweet. You know why? Because if you have to explain a joke, it’s no longer funny.

Ladies and gentlemen, I give you the number one President Trump tweet of 2019. Behold! 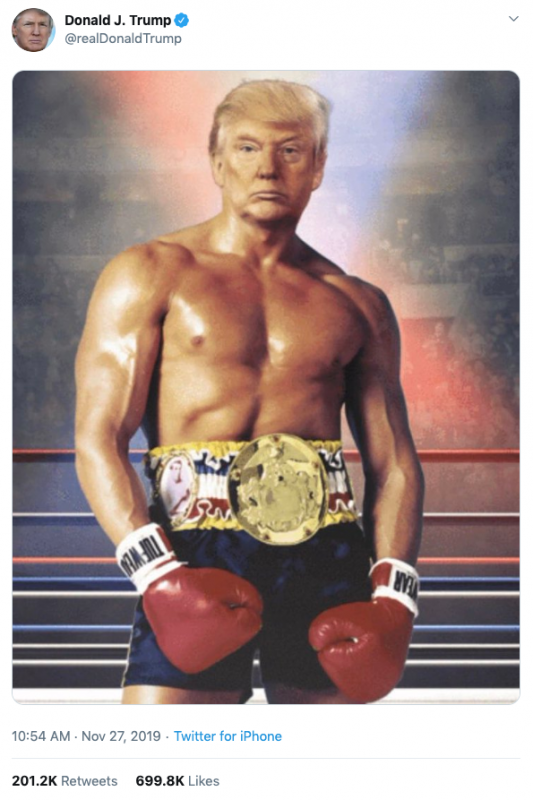 Was there really another tweet that could’ve been number one this year? I’m not even going to acknowledge the haters, which were predictably predictable, because this is so ridiculous and over-the-top I’d prefer to merely think of it as the joke that it was.

Well, what did all of you think of this year’s list? If you have a particular Trump tweet that you would put on a list of your own, again, let us know in the comments.

Here’s to 2020 including more tweets that make us laugh and make the left cringe.