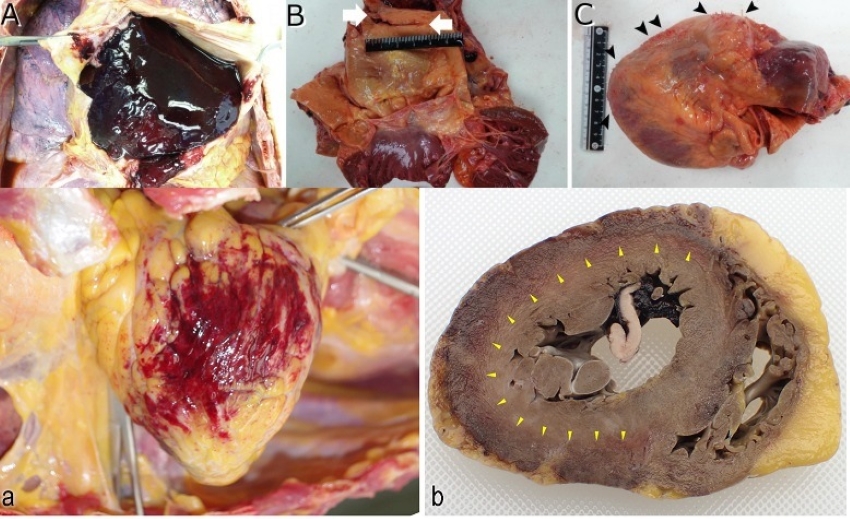 More cases of damage done by the COVID-19 vaccines continue to be published in the medical journals, and now Japanese researchers have published a couple of cases of unusual blood clots found through autopsies after the Pfizer COVID vaccines that seem to corroborate what some funeral home embalmers are also reporting in terms of strange blood clots found in the bodies of dead people.

A study published in the November, 2022 edition of Legal Medicine titled An autopsy case report of aortic dissection complicated with histiolymphocytic pericarditis and aortic inflammation after mRNA COVID-19 vaccination, reported about a Japanese male in his 90s with no previous illness that died two weeks after his third dose of the Pfizer COVID-19 vaccine.

He was diagnosed with heart failure but refused hospital admission. The patient was prescribed a 3-day course of diuretic medication, which relieved his symptoms and decreased the NT-pro BNP level.

However, he was found lifeless in his kitchen on the morning of the fourth day after consulting the doctor. He had received a third dose of BNT162b2 approximately 2 weeks before death.

No previous illness was reported. He did not have a history of smoking or habitual alcohol consumption. A police investigation at the man’s home revealed no suspicious activity.

An autopsy revealed blood clots in the heart:

… an autopsy was performed 35 h postmortem. The deceased was 156 cm in height and weighed 52 kg. The pericardial sac was filled with dark red clots (Fig. 1A). The ascending aorta had a 2.5 cm intimal tear at 4 cm above the aortic annulus (Fig. 1B). The aortic media was dissected, and the adventitia was perforated within the pericardial cavity. The heart weighed 458 g and had a white villous surface (Fig. 1C). Coronary arteries showed mild atherosclerosis.

The report of microscopic examination is interesting because they report seeing “elastic fibers” similar to what Richard Hirschman, a funeral home director and embalmer, has also reported seeing.

Microscopic examination revealed fibrously thick epicardium with inflammatory cell infiltration predominantly composed of macrophages and lymphocytes (Fig. 2A and 2B). Minimal necrosis of the outermost layer of the myocardium in the left lateral wall was also detected.

The pericardial membrane was thick with fibrin deposition and hypertrophic fibroblasts. Macrophages and lymphocytes were also detected in the membrane (Fig. 3).

The researchers used “histopathological findings” which they claim “are often not used in the diagnosis owing to the difficulty of the sampling procedure” because “pericardial samples can only be obtained surgically.”

Although pericardioscopy-guided percutaneous biopsy of the pericardium has been reported without major complications, this procedure is technically challenging, and an experienced operator is necessary.

To the best of our knowledge, this is the first case report of histologically proven pericarditis after COVID-19 vaccination.

This case was a 72-year-old woman who received the first dose of the Pfizer mRNA vaccine and died 2 days later.

The autopsy revealed multiple microthrombi in the heart, brain, liver, kidneys, and adrenal glands. The thrombi were CD61 and CD42b positive and were located in the blood vessels primarily in the pericardial aspect of the myocardium and subcapsular region of the adrenal glands; their diameters were approximately 5–40 μm.

Macroscopically, a characteristic myocardial haemorrhage was observed, and the histopathology of the characteristic thrombus distribution, which differed from that of haemolytic uraemic syndrome and disseminated intravascular coagulation, suggested that the underlying pathophysiology may have been similar to that of thrombotic microangiopathy (TMA).

She had no history of blood clots prior to receiving the Pfizer shot.

She had no medical history of deep vein thrombosis, systemic lupus erythematosus, recurrent pregnancy loss, haematuria, and haematopoietic stem cell or solid organ transplantation. Laboratory testing showed that her liver and kidney function, as well as blood count, were within normal limits one month before vaccination. The absence of thrombocytopenia and anaemia was confirmed 10 days before vaccination.

A medicolegal autopsy was performed approximately 24 h after she was found deceased to investigate the manner of her death, since vaccination was suspected to have been the cause.

At autopsy, the patient’s body length and weight were 155 cm and 53.0 kg, respectively. There were no reddening or wheals observed on the body surface. The heart weight was 394 g, and 170 mL of concentrated yellow-translucent pericardial fluid with fibrinous precipitate was present in the pericardium. Marked petechial haemorrhage was found on the surface of the posterior pericardium (Fig. 1a). Gross examination after 10% buffered formalin fixation revealed black-red discoloration throughout the circumference of the pericardium and outer surface of the myocardium (Fig. 1b).

Numerous microthrombi without inflammatory cells were found in the small vessels, arterioles, and capillaries of the anterior, posterior, and lateral walls of the left ventricle, right ventricle, and interventricular septum, located predominantly at the border between the haemorrhagic and non-haemorrhagic areas (Fig. 1c and f).

The vascular diameter of the microthrombi was approximately 5–40 μm, and the microvessels were congested and dilated.

As mentioned above, platelet microthrombi were detected in multiple organs, predominantly in the heart, and injuries to the other organs were limited. Therefore, it was conceivable that the sudden death was cardiac in origin.

These autopsies and studies were performed because the people died shortly after receiving a dose of the Pfizer mRNA vaccines. The blood clots and “elastic fibers” observed seem consistent with what embalmers preparing bodies for funerals are seeing, although in many of those cases the embalmers are perhaps seeing bodies that died weeks or months after receiving the vaccines, and hence the larger fibrous structures that they are pulling out of the veins.