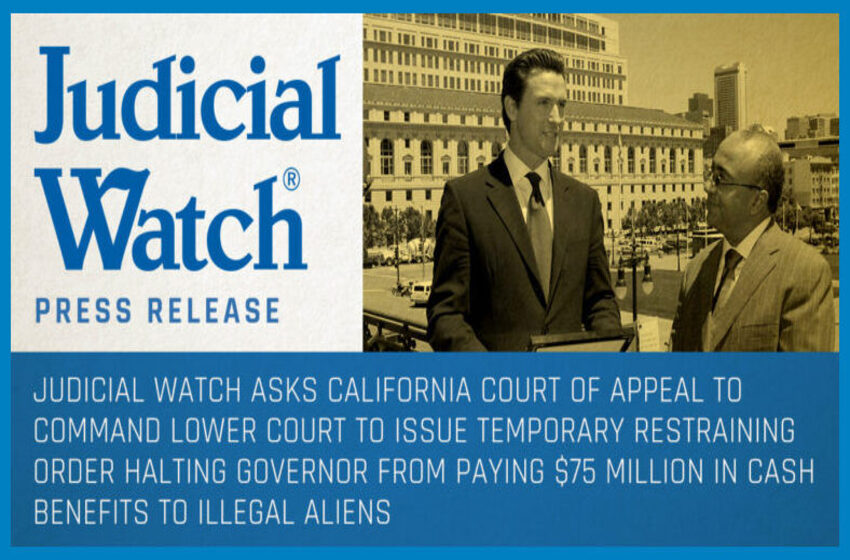 (Washington, DC) – Judicial Watch announced today that it has filed in the California court of appeals a Petition for Writ of Mandate that would require a trial court to issue a temporary restraining order halting California Governor Gavin Newsom’s plan to use taxpayers’ dollars to provide cash payments to illegal aliens. Though the lower court said that Judicial Watch taxpayer clients are likely to succeed on the merits (that Governor Newsom has no authority under law to spend the money), there’s more harm to illegal aliens during the coronavirus crisis than there is to California’s 40 million taxpayers and citizens. Judicial Watch filed the writ petition in the California Court of Appeal, Second Appellate District, in order to overturn a May 5, 2020 Superior Court of Los Angeles County ruling denying a temporary restraining order sought by Judicial Watch in the case (Crest et al. v. Newsom et al. (No. 20STCV16321)).

Today’s filing asks the Court of Appeal to command the Superior Court to issue the restraining order against California Governor Gavin Newsom and his Director of the California Department of Social Services Kim Johnson, enjoining them from making what is now an imminent, May 18, 2020 illegal expenditure of $79.8 million of taxpayers’ funds to illegal aliens pending the final determination of the taxpayer action brought by Judicial Watch in the lower court.

On April 29, Judicial Watch filed a lawsuit in the Superior Court of California for the County of Los Angeles on behalf of two California taxpayers, Robin Crest and Howard Myers, asking the court to stop the state from illegally expending more than $75 million of taxpayer funds as direct cash assistance to unlawfully present aliens (Crest et al. v. Newsom et al. (No. 20STCV16321)).

The lawsuit alleges California Governor Gavin Newsom overstepped his authority and violated federal law when, without affirmative state legislative approval, he took executive action to create the “Disaster Relief Assistance for Immigrants Project” and to provide cash benefits to illegal aliens who otherwise are ineligible for state or federal insurance or other benefits due to their unlawful presence in the United States. On May 5, Judicial Watch filed an application for a temporary restraining order in the case to prevent Newsom and Johnson from unlawfully spending any of the $75 million slated for direct cash benefits or the $4.8 million earmarked for the administrative costs of having community based organizations distribute the money to unlawfully present aliens under guarantees of privacy and state secrecy.

“It is astonishing that any court would allow government officials to ignore the law and spend tax money with no legal authority,” said Judicial Watch President Tom Fitton. “The lower court essentially acknowledged Governor Newsom has no legal authority to spend state taxpayer money for cash payments to illegal aliens. And the circumstances are very troubling. The Court of Appeal should overturn the lower court’s manifest error.”