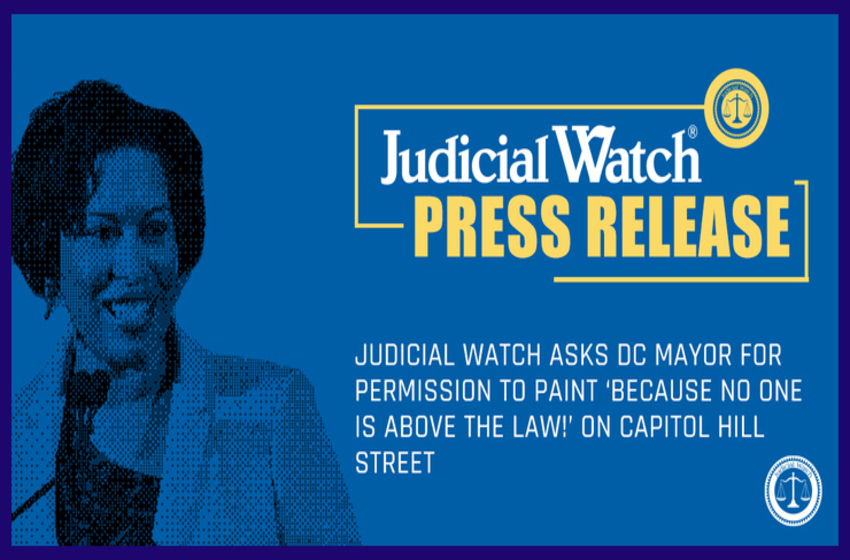 (Washington, DC) Judicial Watch announced today that it has formally asked District of Columbia Mayor Muriel Bowser and DC Attorney General Karl Racine for permission to paint “Because No One is Above the Law!” on a Capitol Hill street (Independence Ave, SW between 2nd and 4th Streets SW). The Judicial Watch message would be the identical size and coloring of the DC Government’s “Black Lives Matter” political message on 16th Street NW.

On June 5, 2020, after days of protests and riots in Washington, DC, Mayor Bowser authorized the paintingof “Black Lives Matter” on 16th Street NW, and later allowed “Defund the Police” to be painted alongside it.

“Mayor Bowser made a decision to turn DC streets into a forum for public expression. Judicial Watch seeks equal access to use this new forum to educate Americans by painting our organization’s motto and motivation, ‘Because No One Is Above the Law!,’ on a Capitol Hill street,” said Judicial Watch President Tom Fitton. “This rule of law message is timely, as it a reminder that rule of law applies to – and protects – all Americans. If we are unlawfully denied access and face viewpoint discrimination, we are prepared to go to court to vindicate our First Amendment rights.”

Re: Request to Paint Message on Independence Avenue SW

We note with interest Mayor Bowser’s recent decision approving the painting of “Black Lives Matter” on 16th Street NW and the approval of and/or acquiescence in the painting of “Defund the Police” alongside the first message. Both messages are expressive activity.

Judicial Watch, Inc. is a Washington, DC-based, non-profit organization headquartered in Southwest DC. For more than twenty-five years, Judicial Watch, Inc. has promoted transparency, accountability and integrity in government and fidelity to the rule of law. Our motto is “Because No One Is Above the Law!” – a message that is particularly relevant today because it applies equally to law enforcement and public officials as well as to protesters, looters, and rioters.

Because DC streets surfaces are now being used as public fora for expressive activity, we would like to have our motto painted on a street, preferably Independence Avenue SW, between 2nd and 4th Streets SW, which is near our offices. The lettering would be identical in size and color to the lettering used to paint “Black Lives Matter” on 16th Street NW. Judicial Watch, Inc. would pay the cost of the painting, but we would likely need the assistance of the DC Government to aid in traffic diversion and parking restrictions while the painting is completed. Of course, the painting could be completed when traffic is typically light, as was done with the “Black Lives Matter” message.

As the timeliness of our message is important, please respond within 3 working days. If the Independence Avenue location is not possible, we are open to considering alternative locations. Thank you for your prompt attention to this matter