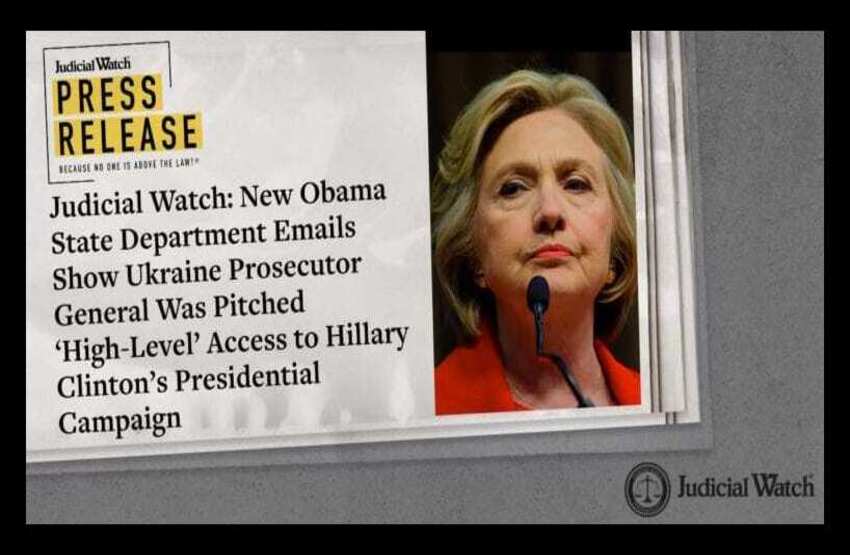 The offer was made by Karen Tramontano, who was an assistant to President Clinton and deputy White House Chief of Staff. She is the CEO of Blue Star Strategies, a Democrat lobbying firm that was hired by Burisma Holdings to combat corruption allegations.

In the same 2016 email, Kent stated that he responded to Lutsenko by recommending that he not take the offer due to corruption concerns with Burisma and the Clinton Foundation.

Judicial Watch obtained these documents in response to a Freedom of Information Act (FOIA) lawsuit against the State Department seeking documents related to a reported “untouchables list” given in late 2016 by former U.S. Ambassador to Ukraine Marie Yovanovitch to Ukraine Prosecutor General Yuriy Lutsenko (Judicial Watch vs. U.S. Department of State (No. 1:19-cv-03563)). The lawsuit requests:

The records include a September 3, 2016, email from Kent to Yovanovitch and other colleagues which details that Lutsenko informed him that he was pitched high-level access to Hillary Clinton’s presidential campaign by Blue Star Strategies. The email’s subject line is “Lutsenko now likely not to go to DC with Blue Star, other Ukr issue comments,” which says:

[Lutsenko] confirmed he had been pitched by Blue Star, not sought them out. He said he honestly didn’t know how Blue Star was to get paid – he didn’t have funds – and that some BPP MP [Petro Poroshenko’s Solidarity Party member of Parliament] that we probably didn’t know “and that’s good” ([redacted]??) had introduced them to him. Blue Star CEO Tramontano’s pitch was that she could gain him access to high levels of the Clinton campaign (GPK note: she was Podesta’s deputy as deputy COS the last year of Bill Clinton’s tenure), and that was appealing – to meet the possible next Presidential Chief of Staff.

Later in the same email, Kent added that he suggested that Lutsenko not take that offer because Blue Star represented Burisma. Kent also mentioned corruption concerns related to the Clinton Foundation and Podesta:

In connection to Blue Star, I noted their representation of Burisma/Zlochevsky, mentioned the various money flows from Ukraine to lobbyists that had been prominently int he news this past month, whether Manafort/Klueyev via Brussels to Podesta Group and Weber/Mercury, Yanu’s Justice Minister Lavrynovych to Skaden/arps-and Greg Craig – and Pinchuk to Clinton Foundation, and the media attention being paid at present to the Kyiv/Washington gravy train….

…and he got the drift. Not ideal timing, little receptive audience, and wrong facilitator.  He said he’d figure out a better time when there would be more traction/better audience.

This email is inconsistent with Yovanovitch’s October 2019 testimony under oath before the U.S. House of Representatives in the Trump impeachment inquiry, that she knew very little about Burisma Holdings and the long-running corruption investigation against it stating, “it just wasn’t a big issue.”

“This smoking gun email ties Hunter Biden’s Burisma’s lobbying operation to an influence-peddling operation involving the Clinton campaign during the 2016 election,” said Judicial Watch President Tom Fitton. “This further confirms the Obama-Biden-Deep State targeting of President Trump was to cover-up and distract from their own corruption.”

In October Judicial Watch made public State Department records which include a briefing checklist of a February 22, 2019, meeting in Kyiv between Yovanovitch and Sally Painter, co-founder and chief operating officer of Blue Star Strategies.

The emails show that Yovanovitch was aware of the social media monitoring program.