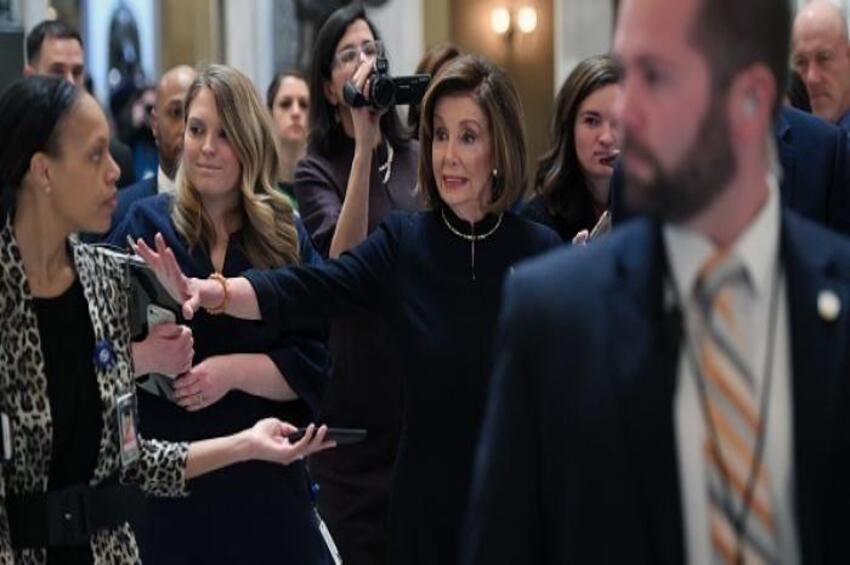 Speaker of the House Nancy Pelosi(D-Calf.) walks to the House floor to launch the proceedings that ended with the impeachment of President Donald Trump on Dec. 18, 2019. (Photo by SAUL LOEB/AFP via Getty Images)

(CNSNews.com) – Democrats just don’t want the impeachment process to end, “because it’s been so much fun,” Advisor to the President Kellyanne Conway said sarcastically after the House voted to impeach President Trump.

House Speaker Nancy Pelosi (D-Calif.) surprised many Americans Wednesday night, when she said she would delay sending the two articles of impeachment to the Senate until she is assured of a “fair” trial there.

As many pundits have noted, this puts the Trump impeachment in uncharted territory.

“She wants to go on and on so she can gather more evidence,” Conway told Fox News’s Laura Ingraham.

“First they were rushing through it, because as (Rep.) Doug Collins so deftly says, the clock and the calendar. Now they want to wait, and you know who is probably hopping mad? The 2020 Democratic presidential field. They have a debate — they have a debate scheduled tomorrow night. Does anybody care?”

Conway pointed to polls indicating that Americans opposed the protracted impeachment proceedings in the House.

“I think the labyrinth, meandering process that happened in the House actually hurt them. The substance was never on their side. But the way they tried to present it to the public never really captured the public and made it sticky enough for them to want to stick around and follow the procedures.

“So I think the Senate trial would be a more familiar and more fair process, but of course she (Pelosi) wants to wait because she’ll never mollify all of the haters and detractors and distracters in her conference.”

After the impeachment vote, Rep. Adam Schiff (D-Calif.), the chairman of the House intelligence committee and a determined Trump foe, said, “The question is now whether or not Senator McConnell will allow a fair trial in the Senate.

Sen. Rick Scott (R-Fla.) told Ingraham he thinks Pelosi won’t send the articles to the Senate because she knows the trial “will be fair.”

“We’re not going to have hearsay evidence. We’re going to let people participate, so I think — here’s what’s going to happen in the Senate. If she sends them, the House (managers), they can make their case, the White House will make their case, but we already know there’s no case. I mean, the Democrats have proven Trump didn’t do anything wrong,” Scott said.

Rep. Steve Chabot (R-Ohio) told Ingraham, “The Democrats never should have put the president or nation through this.”

There were no high crimes and misdemeanors. There weren’t crimes at all. In fact, I mean, think about obstruction of Congress, one of the grounds. It’s incredible. I mean, that’s what the branches of government do. We battle it out.

Every school child in America knows that we have three branches of governments, we fight about things, and if the legislative branch and the executive branch don’t — they’re not getting along on something, go to the third branch, the judicial branch. What they did, rather than go to the court, they decided to impeach the president because they wanted to impeach him from day one when he was inaugurated.

Even before the inauguration, they were bound and determined to impeach this president. Now they’ve done it. But I think they’re going to be sorry they did this because I think the American people are going to hold them accountable.

Rep. Josh Hawley (R-Mo.) tweeted: “Is this a joke? Democrats impeach the President without alleging a single crime, with a bipartisan coalition voting AGAINST, and now don’t have the guts to actually try their case? Did they put the country through this chaos just for their own amusement?”