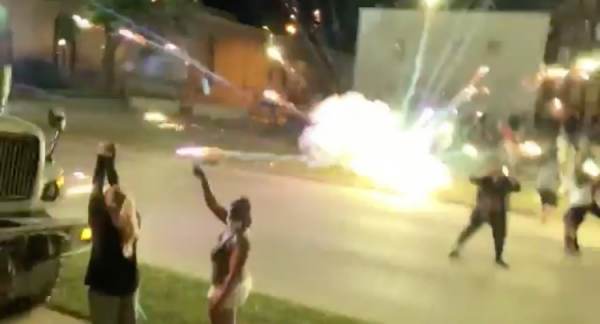 Riots and protests erupted Tuesday evening for the third night in a row in Kenosha following an officer-involved shooting Sunday.

Black Lives Matter militants gathered outside the Kenosha County courthouse and threw fireworks and projectiles at law enforcement standing behind a fence barrier.

Protesters have begun to try to push over a fence in front of the courthouse in Kenosha. Sheriff’s deputies in riot gear have emerged from the courthouse. Some are throwing projectiles at the officers. pic.twitter.com/mkRMuUx3TK

Armored vehicles moved in and the battle begun:

A standoff between law enforcement and BLM terrorists after police declared the protest an unlawful assembly:

KENOSHA: a stand-off begins in the streets outside the courthouse

The assembly had been declared illegal and remaining in place will result in criminal charges pic.twitter.com/UKK1ANiuFl

BREAKING: law enforcement takes an aggressive offensive on #BLM rioters for the first time in 3 days #KenoshaRiot is underway pic.twitter.com/If82jARXO8