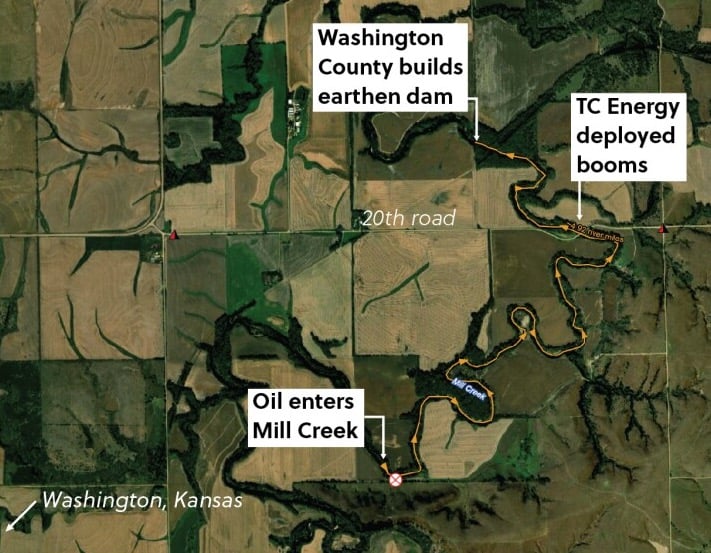 The Keystone Pipeline runs from Alberta to Houston, almost in a straight line south down “Tornado Alley” in America’s midwest, running from North Dakota to Texas.

The overall pipeline is 2,687 miles long, is owned by TC Energy, and carries 860,000 barrels of oil per day through its 30 inch diameter tubes. The current price of oil per barrel is roughly $80. So the pipeline is moving roughly $68.8 million worth of oil through its pipeline every day, or $25.1 billion per year.

The pipeline shut down on December 7th after a spill of 14,000 barrels of oil in rural North Kansas. The Calgary, Canada-based company received permission from the Biden administration on Friday to reopen the pipeline, though it did not give a definitive date when it would restart.

The spill, in Washington County, Kansas, affected both farmland and a nearby creek.

Many media outlets have erroneously reported that the oil was entirely spilled into a creek. In fact, the pipeline was on a hill above a small creek and some of it flowed into Mill Creek. The creek is not connected to any source of drinking water.

As well, the media never includes the fact that 2,600 barrels were recovered from the spill. The company claims even more has been recovered: 7,690 barrels representing over half of the spill. The mainstream media also does not include the fact the company sent 317 workers to the site to clean up the spill. So far the carnage has included 4 animals and 71 fish from what is being billed as the ‘worst oil spill in recent American history’ and also by some as an environmental cataclysm and the largest Keystone spill.

The pipeline has been a political football. Former President Obama caved to environmentalists and cancelled its permits, claiming it didn’t create enough jobs. America’s President Donald Trump restarted the project on his 4th day in office to bring down energy and gas prices. One of Biden’s first acts in January 2021 was to reverse Trump and again cancel the project.

Soaring gas prices resulting from the absolute failure of the Biden economic policies, including record-setting gas prices that have only recently come down, put the political pressure on Biden to take practical steps to lower energy prices even if it angered his hard-left environmental allies.

The preferred way for groups like the Sierra Club to fight these policies by using native/indigenous groups to serve as legal proxies and stall such projects, became harder after the energy company simply paid the legal bribe of