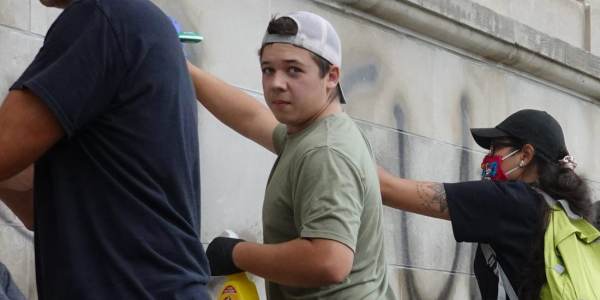 Yesterday Rittenhouse was charged with up to 170 years for his actions that night.

Here’s a comparison of charges and the events that occurred.

There is video evidence of young Rittenhouse in Kenosha the morning of the shootings helping clean paint from the buildings that were desecrated by BLM rioters before the shooting.

Kyle Rittenhouse photographed volunteering to help clean up BLM graffiti in Kenosha earlier in the day, before defending himself against rioters. https://t.co/tmNsqZ4Jod

There is more footage from the night of the shooting showing Rittenhouse carrying a gun and being thanked by the police for his help.

Police not only didn’t arrest suspect Kyle Rittenhouse at the scene, but at the start of the night they thanked an armed group who had come out âand at the end of the night, video shows Rittenhouse was able to walk right out of the Kenosha hot zone.https://t.co/GQ9b0qf4hW

Unfortunately things quickly changed for the young Rittenhouse on Tuesday night.   So much so that he is now charged with multiple crimes.

He is facing a maximum sentence of life + 170 years and 9 months.

Kyle’s charges and the evidence the prosecutors are currently relying on are outlined in this thread.

Rittenhouse is charged with intentional murder for shooting Anthony Huber who was carrying a skateboard the night of his death.

This is the most serious charge.  Huber has a long criminal record.

The most serious charge is Intentional Homicide of Anthony Huber, on which Kyle faces life + 5 years.

Evidence shows Huber hitting Kyle with a skateboard while Kyle is on the ground, then Huber struggles to get the rifle out of Kyle’s hands. One shot is fired during the struggle. pic.twitter.com/n881Tuj01R