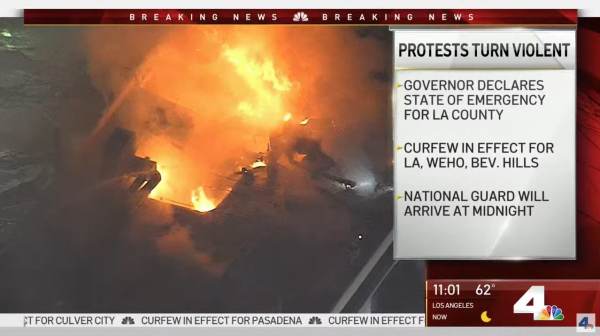 The rioting hoards took over Los Angeles, and the National Guard is moving in to relieve the LAPD and other area agencies. Several buildings were engulfed in flames, many stores looted, untold number of arrests.

A curfew will be in effect in downtown Los Angeles from Saturday night to Sunday monring, LA Mayor Garcetti says, as unrest continues in the LA-area. http://4.nbcla.com/sJ5Y7YG

Countless stores were vandalized and looted:

It appears the Gucci store on Rodeo Drive, a famed high-end shopping district in the #LosAngeles area, was attacked. Worth noting that Beverly Hills was not affected during the Watts unrest of 1965 or the Rodney King unrest of 1992. pic.twitter.com/0w7oGYKRUQ

This was the scene at CBS studios, where protesters inadvertently ran over one of their own with a dumpster as they try to crash through the gates:

The protest have taken an interesting turn in Los Angeles pic.twitter.com/WVFE0elo8Z

City of LA Under Curfew

The entire city of LA is under a curfew after protests and violent unrest have overtaken the city. http://4.nbcla.com/B6fOj0b

As darkness fell, several fires were started across the city.