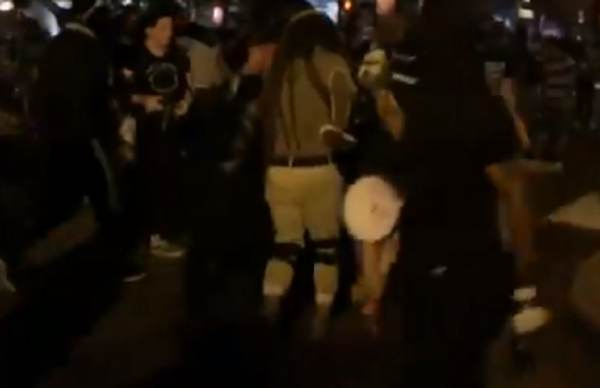 Blaze reporter Elijah Schaffer is on the ground in Lancaster where a riot is unfolding in response to police shooting a man who was lunging at an officer with a knife. He tweeted a video of the call for escalating violence.

PENNSYLVANIA: “let’s shoot them n*gga” a BLM protester yells regarding the Lancaster police

He is rushed away by medics. Current condition unknown pic.twitter.com/ewS7tmm8rX

The rioters were swarming a local police department when the incident took place.

Schaffer tells the Gateway Pundit that the rioters were given eight warnings to vacate police property, but did not comply. The situation was then declared to be an unlawful assembly.

“They had an initial minimal gas release,” Schaffer said. He explained that after this, the police retreated, and the rioters moved in closer. “So, the police really unleashed rubber bullets that hit at least a dozen protesters, used lots of gas, and it effectively disbursed the crowd for 20 minutes.”

Soon, the rioters returned and began screaming at police that they should have tazed the violent suspect instead of shooting him.

Ricardo Munoz was fatally shot by police after his sister called the police to report that he was aggressive and attempting to break into their mother’s home. When officers arrived, he lunged at one of them with a knife.

Munoz had a similar encounter with police in 2019 after he stabbed four people.

“Once they arrived at the scene, officers arrived to find Munoz standing on the sidewalk with a knife. When he saw officers, Munoz then held the knife to his own throat, police said,” PennLive reported at the time. “Officers told Munoz to drop the knife, but police said he he did not comply. Munoz then tried to climb over a handrail toward the front of a residence, police said. An officer had to use a Taser to subdue him, and he was taken into custody.”

It is unclear what charges Munoz faced over the stabbings or why he was free in 2020.

The Gateway Pundit has reached