Here is the bottomline in a nutshell–Susan Rice has been caught red handed trying to construct a lie about what Barack Obama knew and did not know with respect to General Michael Flynn. She claimed to be present when Barack Obama discussed the Michael Flynn intercept but, according to Sally Yates, who was interviewed by the FBI, only Yates, Jim Comey and Barack Obama were present. This new revelation–made possible by the declassification of the Susan Rice email written in the last moments of the Obama Administration–actually bolsters Michael Flynn’s contention that he was the victim of a political hit job designed to take out Donald Trump.

Let me remind you of the essential facts that you must have in mind in order to understand Rice’s clumsy attempt to fabricate an excuse for Obama’s inexcusable spying on Donald Trump, his family and his team.

December 29, 2016: Michael Flynn, who was vacationing in the Dominican Republic, returned Russian Ambassador Kislyak’s phone call at the behest of the Trump Transition team back in Mar-a-Lago and requested that Russia not escalate the situation and only respond to the U.S. Sanctions in a reciprocal manner (see here).January 3, 2017: Deputy FBI Director Andy McCabe tells Department of Justice official, Mary McCord, that the FBI had been planning to close the Flynn investigation but “discovered” his phone calls with the Russian Ambassador. McCabe described the content to the calls (Exhibit 3, page 2).January 4, 2017: The FBI Agent leading the investigation of the General Flynn sends Peter Strzok the memo recommending the case be close because there was no evidence against the General. (Exhibit 1) Peter Strzok tells the Agent that the “7th Floor” is interested.January 5, 2017: Barack Obama tells Acting Attorney General Sally Yates in the presence of Jim Comey that he had learned about Flynn’s conversation with the Russian Ambassador on sanctions. (Exhibit 4)

Please take a close look at Sally Yates’ account to the January 5, 2017 meeting: 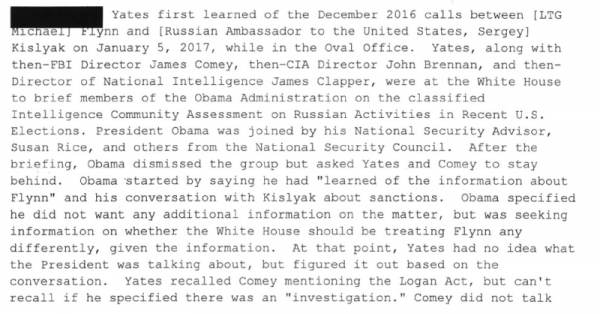