Former Twitter CEO and multi-millionaire Dick Costolo admitted on Wednesday night that he wants to murder those people he doesn’t agree with politically.

Costolo tweeted this out on Wednesday night. 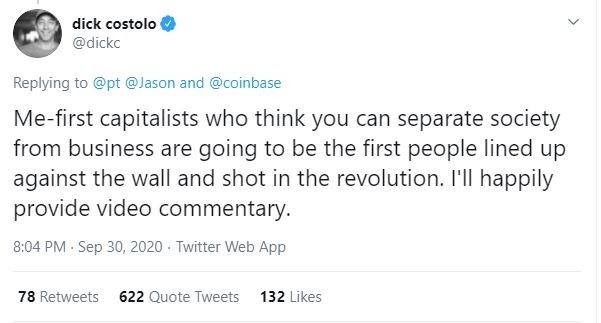 This is a direct threat of murder posted on Twitter.

This isn’t a nobody. This is a near billionaire. Former Twitter CEO.

He wants to MURDER people he doesn’t agree with poltically.

They won’t stop at bans.

Here is what they want, in their own words: https://t.co/QFf55igwhPpic.twitter.com/FIyijJO8bD

Former Twitter CEO worth 300 MILLION wants to line up capitalists for a firing squad.

Immoral and violent left-wing 1%ers might be the most dangerous, immoral, people you’ll ever meet.

Nazis did that to the Jews. Heil Dick @TwitterSafety

just a piece of advice: “i disagree with someone therefore i can murder them” is usually bad

Within seconds of posting this! Just wow! pic.twitter.com/1HG7q6cGK3

WTF? Sounds like you’ve reading a little too much Mao and Stalin and Castro and it’s gone to your head.