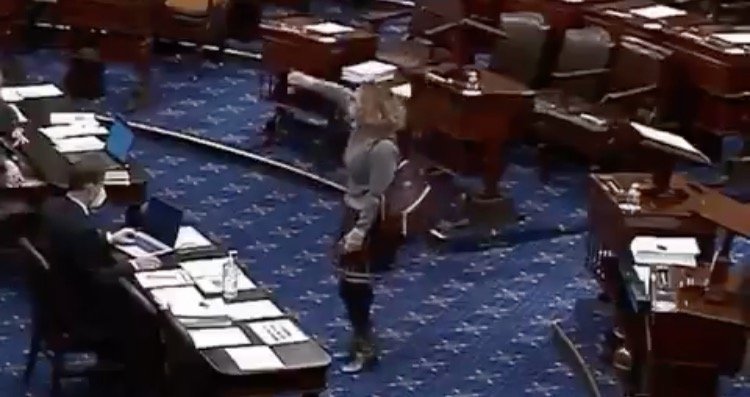 A total of 8 Democrat Senators defected on the minimum wage increase but leftists attacked Sinema for her enthusiastic thumbs down vote on the Senate floor.

Sinema channeled John McCain and did a thumbs down vote on the senate floor.

Sinema voting no on the minimum wage. #girlbosspic.twitter.com/ybyGcXZ8Vl

The Senate stripped the minimum wage hike from the Covid bill, but a group of far left lawmakers led by Socialist Bernie Sanders forced a separate vote on the policy.

The vote was held on Friday and 8 Democrat Senators defected.

With a 42-58 vote against the wage hike, it shows the Democrats are at odds within their own caucus and can’t even pass the provision with a simple majority vote.

Some leftists requested $15 from her on Venmo to make a point. All were declined and Sinema was forced to make her account private.

Look at this. Folks here in AZ outraged by @kyrstensinema‘s vote to block 839,000 Arizonans from getting a raise to a living wage have been requesting $15 from her on Venmo. All declined, of course. And her account is now private. pic.twitter.com/2ehTzT8bBk

The left-wing bluecheck mafia was triggered by Sinema’s “John McCain” thumbs down vote.

No matter what you think of @kyrstensinema‘s vote, these optics are horrible.

There’s no rule that requires Senators to vote the way she did (a la John McCain healthcare vote in 2017).

You may think people don’t deserve to be paid more, but you don’t need to make a show of it. pic.twitter.com/Cj0iYcoDPH

Did Sinema really have vote against a $15 minimum wage for 24 million people like this? pic.twitter.com/Jv0UXLKLHI