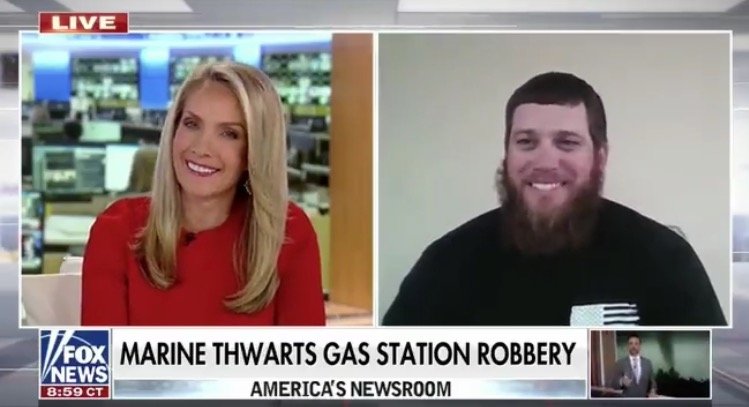 The heroic US Marine who thwarted a gas station armed robbery in Arizona earlier this week appeared on Fox News Friday to discuss the incident.

Three people walked into an Arizona convenience store when a customer, who just happened to be a former US Marine, quickly grabbed the gun and tackled the robber as two others ran away.

According to police, the Marine held the robber down (toxic masculinity) until law enforcement arrived.

“The Marine Corps taught me not to mess around,” the veteran told deputies.

The Marine, James Kelcer, said he takes his personal safety and the safety of others “very seriously” as he recounted the incident on Fox News.

“I turn around to go and leave, kind of walk out and as I’m turning around I hear the door kind of open real aggressively,” Kelcer said. “At that point, the ‘spidey senses’ tingled a little bit.”

“I saw two other guys with no other weapons and decided that’s the guy that I’m going to hit,” he added.

At the end of the interview, Kelcer signed off by saying, “Epstein didn’t kill himself.”

The Marine who stopped the corner store robbery in the viral video was just on Fox News.