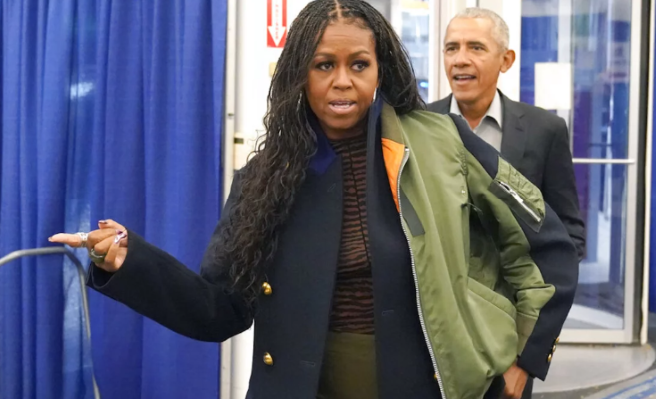 What exactly was going to happen if Michelle wore braids? Were they going to redo the election? Impeach Barack Obama?

Former first lady Michelle Obama made the ridiculous claim last week that she always wanted to wear braids in the White House but didn’t because she thought the country would not accept it. This nonsensical claim reveals more about the former first lady’s prejudices about white people than the reality of the situation.

Obama commented on her previous hairstyles while on a book tour to promote her latest novel, The Light We Carry: Overcoming in Uncertain Times. She never wore braids because she wanted the focus to be on her husband’s political goals instead of her hair. That is why she always wore her hair straight. She claimed “Americans weren’t ready” for her to have braids.

Oh really? According to whom? There’s no proof of this, and it’s absurd even to make this assertion. It exemplifies the ludicrous bubble of prejudice the Left truly live in. They have very little faith in their countrymen. Let’s not forget that most of the country’s voting population voted a black family into the White House twice.

Barack Obama won two presidential elections with relative ease. He received 52.9% of the votes in 2008, the highest percentage a candidate received since 1988 and the fifth highest since 1960. He received more votes than any other presidential candidate in history in 2008 (at the time). While she may try to blame the country’s lack of tolerance, in reality, it was Michelle’s feelings about white people that caused this reluctance.

What exactly was going to happen if Michelle wore braids? Were they going to redo the election? Impeach Barack Obama? Throw the Obamas out of the White House? In fact, one could argue that if there was a time for her to wear braids, it was right after the 2008 election. No one who voted for Barack Obama would suddenly dislike him or his family if Michelle Obama wore braids. And the people that didn’t like him were still not going to like him.

Plus, consider what was going on during Obama’s first term. Islamic terrorism was spreading. The country was going through its worst financial crisis since the Depression. People were worried that their 401(k) and savings accounts were gone forever. Michelle’s hairstyles were the least of their concerns.

When talking about her reluctance to wear braids, she said the country was “getting adjusted” to having a black family in the White House. She also quipped that she wanted to keep her hair straight so they could “get healthcare passed.” But even that’s a bogus claim because when the Affordable Care Act passed Congress in 2010, it was very unpopular, and most of the country disliked it and continued to do so for the next six years. Michelle wearing braids wouldn’t have mattered.

No, what stopped Michelle Obama from wearing braids was Michelle Obama and her dim view of white Americans as unaccepting. It wasn’t reality. She stereotyped white people, the same millions of white people who voted her husband into office, and made her decision. That’s what caused her not to wear braids, not an unspoken cultural unreadiness or systemic racism against black hairstyles.

It’s time to stop blaming white people for everything. Michelle Obama is a grown woman and had the autonomy to choose however she wanted to wear her hair when she was first lady. None of her husband’s policy decisions were predicated on her hairstyles. She was the one who ultimately chose not to wear braids. If she has regrets, then she should look in the mirror, not insinuate white people were to blame. Otherwise, she’s as bad as the bigots she thought she had to worry about.