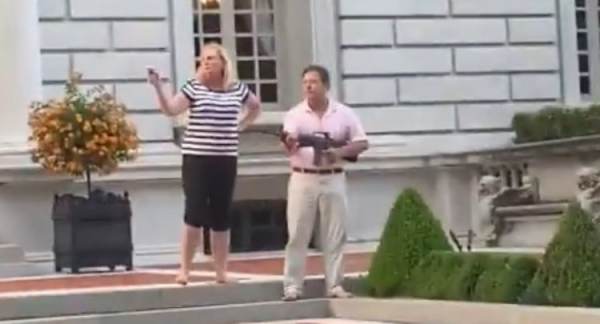 St. Louis Police have served a warrant on Patricia and Mark McCloskey, the armed couple who defended their beautiful and historic home from rioters last month.

Police seized the rifle that Mark McCloskey was seen holding in videos of the incident that went massively viral.

“Late Friday evening 5 On Your Side confirmed attorney Al Watkins was no longer representing the McCloskeys, and that attorney Joel Schwartz had taken over. Schwartz confirmed a search warrant was issued at 8 p.m. Friday night, but would not say what was taken from the home. Schwartz also said he does not know where the handgun is,” local station KSDK reports. “Schwartz told 5 On Your Side he does not believe charges are warranted against the McCloskeys and that he hopes to meet with St. Louis Circuit Attorney Kim Gardner’s office next week, but that there is no official appointment at this time.”

No charges are known to have been filed against the couple at this time.

The couple was doxed and threatened by insane leftists for daring to take a stand against the rioters. Many have been demanding charges against the couple for exercising their Second Amendment right.

A couple has come out of their house and is pointing guns at protesters in their neighborhood #StLouis#lydakrewsonpic.twitter.com/ZJ8a553PAU

In livestreamed footage of the incident, you can clearly see protesters enter a gate into the private neighborhood. They also threaten to take the gun from Patricia McCloskey.

In this livestream footage you can clearly see the STL black lives matter mob entered through the gate to a private community. This was not a public sidewalk. https://t.co/NeKHgTBWEupic.twitter.com/UdYq3pGtlb