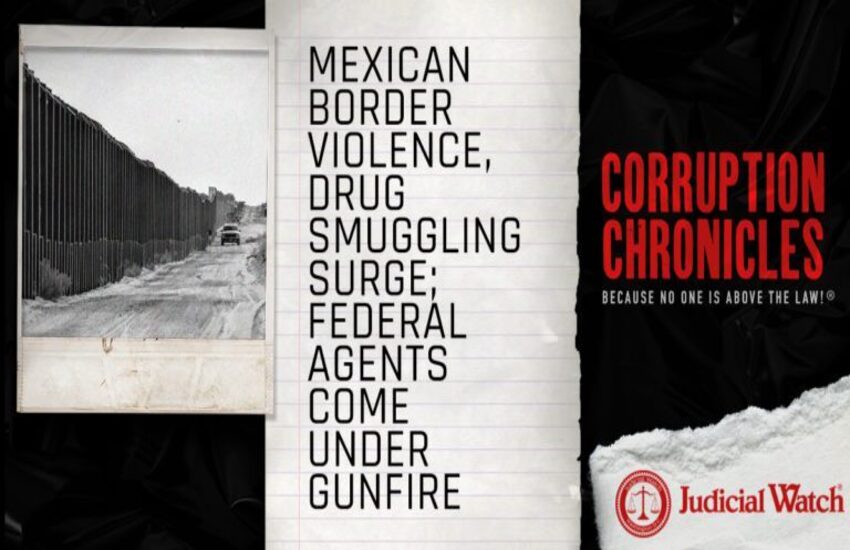 While President Biden’s Afghanistan debacle justifiably receives the world’s attention and vast media coverage, the Mexican border in the U.S.’s own backyard should not be ignored. Besides the unparalleled onslaught of illegal immigrants, the region is becoming increasingly violent with unprecedented criminal activity that includes a distressing escalation in drug smuggling and brazen attacks against American federal agents. Organized Transnational Criminal Organizations (TCOs) are behind the movement, and they are a serious threat to national security and public safety, according to Customs and Border Protection (CBP), the frontline Homeland Security agency charged with keeping terrorists and their weapons out of the U.S.

Examples provided by the agency in the last few days alone help illustrate the disturbing reality along the nation’s 2,000-mile border with Mexico. Federal agents are overwhelmed as criminal elements are fortified and boldly execute human and drug smuggling missions. Federal agents that might get in the way of their illicit operations have become targets of the TCOs, which “are heavily involved in smuggling people, including terrorists, criminals and trafficking victims, as well as weapons, cash, and drugs through sophisticated criminal networks,” CBP writes in a recent statement confirming that several Border Patrol agents have come under gunfire recently in Texas and California. The agency goes on to say that “TCOs conduct their operations without regard for human life—money and power are their only motivation.”

In recent incidents surrounding the California and Texas border regions, suspects used firearms to shoot at several Border Patrol agents, CBP confirms. The agency does not provide further details, presumably for security reasons, but indicates that federal agents are increasingly getting attacked as “criminals will stop at nothing to further their illegal activities.” Life-threatening confrontations are on the rise for agents working to secure America’s borders, the Homeland Security agency discloses. “In many cases, agents find themselves in remote locations where they are significantly outnumbered and do not have immediate backup,” CBP writes in the statement released earlier this month. The agency assures it has protocols in place to protect the safety of the agents enforcing the nation’s laws and that it is collaborating with Mexican law enforcement authorities about the recent shootings. That last part may seem a bit laughable considering Mexico’s notoriously corrupt government, military, and police.

Days after revealing the agent shootings, CBP announced the arrest of more than a dozen fugitives and the seizure of over $2.5 million worth of narcotics in El Paso area ports of entry. In the span of just a few days, the feds seized 650 pounds of marijuana, more than 60 pounds of cocaine, 12 pounds of fentanyl, and seven pounds of methamphetamine. They also arrested 17 fugitives. One of them, a 41-year-old man had violated his probation related to a murder charge. The others committed crimes involving dangerous drugs, alien smuggling, and robbery. The subjects were arrested by CBP officers and turned over to local and federal authorities where their criminal charges were pending. The drugs were seized in various crossings, including Paso Del Norte, Ysleta, and Santa Teresa. During a routine inspection at the Union Pacific railroad yard, CBP drug sniffing dogs discovered 650 pounds of marijuana hidden in the center beams of a rail car.

Other crossing ports along the southern border also report increased criminal activity. In the Rio Grande Valley Sector agents have arrested more than 140 illegal immigrant gang members, including four in the last few days. In the same sector this week, federal agents interdicted three narcotic smuggling attempts with more than 130 pounds of marijuana and 50 pounds of cocaine. “Even with the spread of the COVID-19 virus, human smugglers continue to try these brazen attempts with zero regard for the lives they endanger nor to the health of the citizens of our great nation,” CBP writes in an announcement published this week. Maritime smuggling is also on the rise in southern California, according to CBP figures made public this week. “The transnational criminal organizations involved with maritime smuggling are a continuing threat to border security, public safety and national security,” according to the Homeland Security Investigations (HSI) Special Agent in Charge in Los Angeles.