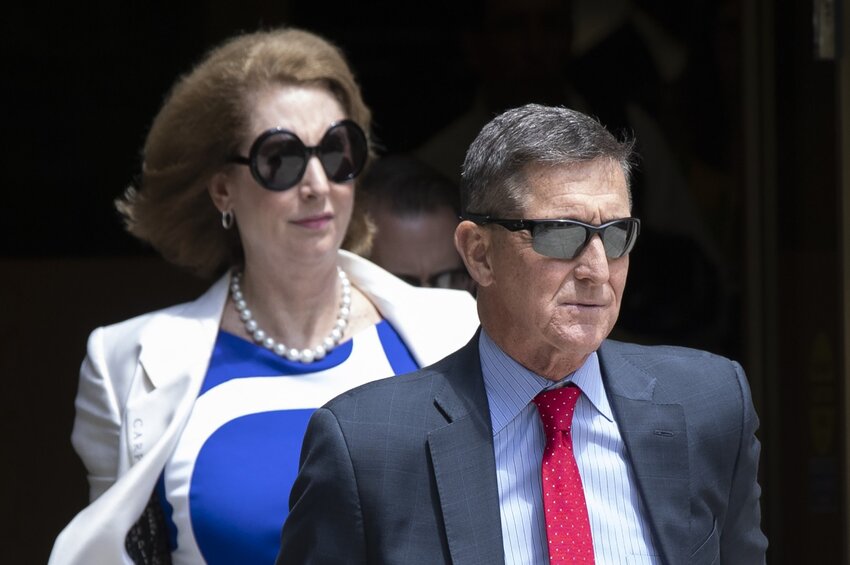 Retired Lt. Gen. Michael Flynn’s legal defense team pressed for the dismissal of his case on Tuesday, arguing he should have been informed of events related to him described in the Justice Department watchdog’s findings on Foreign Intelligence Surveillance Act abuses before he pleaded guilty.

Led by Sidney Powell, a former federal prosecutor who took over the former national security adviser’s legal defense last summer, Flynn’s lawyers condemned prosecutors for what they claimed was the concealment of the Justice Department improperly targeting their client as laid out in Inspector General Michael Horowitz’s December report.

Powell focused on a briefing the FBI gave to then-candidate Donald Trump, Flynn, and others during the 2016 campaign. She also accused Brandon Van Grack, a member of former special counsel Robert Mueller’s team and a lead prosecutor on the case, of ignoring the concerns she raised and hiding exculpatory evidence, known as Brady material, from her client for years.

“The facts of this case stand in stark contrast to the government’s wishful and illusory arguments. Mr. Van Grack effectively concedes the government’s outrageous misconduct documented in the IG Report. He simply proceeds with the bald and specious assertions that it was not that bad or does not apply to Mr. Flynn,” Powell wrote in a court filing submitted on Tuesday. “The IG Report, however, belies his claim, and Mr. Van Grack’s contention that he satisfied the government’s obligations by providing this information before Mr. Flynn’s sentencing now proves the point that he suppressed it when it was most important to Mr. Flynn: before his guilty plea on December 1, 2017, and before what was scheduled to be his sentencing on December 18, 2018.”

Van Grack told the court last week that “the errors and misconduct described in the OIG report … do not amount to ‘egregious government misconduct’ necessitating the dismissal of the charge against the defendant for making material false statements to the Federal Bureau of Investigation.”

Flynn, 61, pleaded guilty in December 2017 to lying to investigators in January of that year about his conversations with Sergey Kislyak, who was at the time the Russian ambassador to the United States. But with his sentencing approaching, Flynn changed his tune in January, telling the U.S. District Court in Washington, “I am innocent of this crime.”

In a filing earlier this year, Powell pointed to a section of Horowitz’s report that showed the intelligence briefing the FBI gave to Trump’s team in August 2016 during the presidential campaign was a “pretext” to gather evidence to help in the counterintelligence investigation into Trump’s campaign. The FBI agent who led that briefing, known as “SSA 1” in Horowitz’s report and believed to be FBI supervisory Special Agent Joseph Pientka, was the same official who accompanied FBI Special Agent Peter Strzok in their controversial January 2017 interview of Flynn.

“The fact of the briefing is neither exculpatory nor impeaching,” the Justice Department retorted last week. “SSA 1’s participation in a briefing of the defendant in August 2016 has no impact on whether the defendant lied to SSA 1 five months later.”

Powell said on Tuesday that “contrary to the government’s response, the IG Report establishes that SSA 1 was chosen and inserted into the presidential briefing for the very purpose of collecting information on Mr. Flynn” and that “this act was outrageous government misconduct that alone warrants dismissal of this prosecution.”

“It is not possible to separate this evidence and information from SSA 1’s later participation in the White House interview of Mr. Flynn,” Powell argued.

Horowitz’s report identified at least 17 ” significant errors or omissions” in the Justice Department’s and the FBI’s use of British ex-spy Christopher Steele’s salacious and unverified dossier when pursuing FISA warrants to wiretap Trump campaign associate Carter Page in 2016 and 2017. According to the FBI, four members of Trump’s campaign, including Flynn, were initially being scrutinized as part of the Trump-Russia inquiry. At the conclusion of his investigation, Mueller did not establish a criminal conspiracy between the Trump campaign and the Kremlin.

The FBI never told Trump’s campaign about its concerns that Russians might be attempting to infiltrate his campaign, and Horowitz criticized the bureau for using an intelligence briefing to gather evidence against Trump and Flynn.

The Justice Department said last week that Horowitz’s report “does not allege that SSA 1’s participation in the briefing amounted to misconduct.”

But Horowitz’s report did conclude that “the FBI’s use of this briefing for investigative reasons could potentially interfere with the expectation of trust and good faith among participants in strategic intelligence briefings, thereby frustrating their purpose.”

“It was material to Mr. Flynn’s defense every day from January 24, 2017, to the day this Court entered its Brady order, and it was material for every day of the 305 days from the time this Court entered that order until Mr. Flynn appeared before this Court on December 18, 2018, ostensibly to be sentenced,” Powell argued on Tuesday. “Had Mr. Flynn been sentenced that day, he would have been serving time while Mr. Van Grack hid this extraordinary information that not only magnifies by ten the importance of SSA 1’s assessment of Mr. Flynn’s honesty but also evinces an unprecedented act of investigatory intrusion into a trusted presidential briefing.”

Powell claimed that “the extraordinary nature of the conduct revealed in the IG Report … warrants imposition of the ‘death penalty’ for this prosecution.”

As part of his plea deal, Flynn agreed to cooperate with Mueller, admitting his guilt in 2017 and reaffirming it in 2018. But he filed to withdraw his guilty plea in January after the Justice Department asked Judge Emmet Sullivan to sentence Flynn to up to six months in prison, though afterward, the department said it believed probation would also be appropriate.

The sentencing hearing for Flynn scheduled for the end of the month was canceled amid legal battles over whether Flynn’s previous attorneys provided him adequate representation.