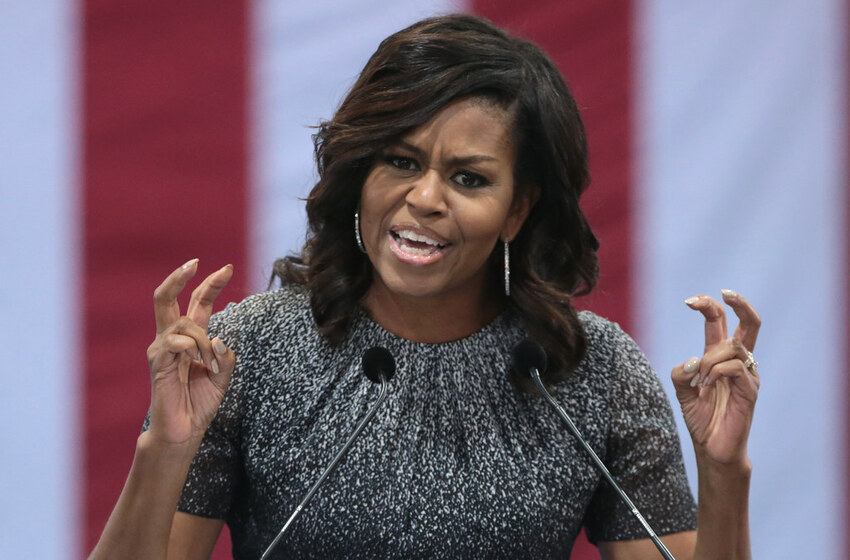 Recently Michelle Obama complained that white folks were afraid of her because white people are all racist. Despite her very privileged life, the former first lady loves to portray herself as a victim, but clearly this is not bigotry. She’s terrifying, hideous, and built like an outside linebacker. Everyone is afraid of her: whites, blacks, Hispanics, Asians, you name it. A fear of Michelle Obama is the one thing all races, ethnicities, and religions can agree on. If she wasn’t so self-absorbed, she could unite the country with her repulsiveness.

Michelle gave a talk at some kind of Obama Foundation function and reminisced about her long history of repelling people. She told a story about how when he family moved into a nice Chicago neighborhood, suddenly all of the white people fled.

Notice how she said her family was better than the white families in the neighborhood? Maybe that’s why they left.

Again with the undeserved sense of superiority. She said the white families could only read about the values that her black family had, meaning the whites had no values. I’m telling you, the white people left because Michelle’s family were insufferable elitists, kind of like how Michelle is now.

“There were no gang fights, there were no territorial battles but one by one they packed their bags and they ran from us and they left communities in shambles,,” said Michelle.

Michelle continued on this point that she was oblivious to by saying as the white people left, the neighborhood became more dangerous. She’s not making the point that white people are racist, just that black neighborhoods are not nice places to live and raise a family.

Michele also referred to this white flight as an “injustice.” Apparently white people owed her to stay in the neighborhood to keep more black people from moving in and turning it into a shithole. That’s now how it works.

“I can’t make people not afraid of black people. I don’t know what’s going on, I can’t explain what’s happening in your head – but maybe if I show up every day as a human, a good human, maybe that work will pick away at the scabs of your discrimination,” Michelle said.

Wow, is she full of herself or what? She thinks just being the wonderful person she’s sure she is qualifies as “work” and that eventually just being herself is going to wear away the racism.

She is at least right that she can’t make people not afraid of her, but it has nothing to do with her skin color. She’s a freak of nature and that is terrifying to all peopl