We are UNITED – We are POWERFUL – We are STRONG- We are READY!

In a stunning harbinger of things to come across the country, on Sunday afternoon, amid calls for defunding police departments countrywide, the Minneapolis City Council members went one further, and announced their intent to disband the city’s embattled police department, which has endured relentless criticism in the wake of the police killing of George Floyd.

BREAKING: Nine of the 12 members on the Minneapolis City Council have vowed they will work to end policing as the city currently knows it. Council Member Jeremiah Ellison promised the council would “dismantle” the department. http://apne.ws/iwsrHmS

104K people are talking about this

“Community-led public safety” – is that like private militia for the wealthy and ____ for everyone else?

“We are here today because George Floyd was killed by the Minneapolis Police Department. We are also here because, here in Minneapolis and in cities across the United States, it is clear that our existing system of policing and public safety isn’t working for so many of our neighbors,” Minneapolis City Council President Lisa Bender said in a written statement Sunday. “Our efforts at incremental reform have failed.”

The City Council’s decision follows those of several other high-profile partners, including Minneapolis Public Schools, and the University of Minnesota, and Minneapolis Parks and Recreationto sever longstanding ties with the MPD.

The announcement today also arrives after several members of the Council have expressed a complete loss of confidence in the Minneapolis Police Department.

“We are going to dismantle the Minneapolis Police Department,” tweeted Council Member Jeremiah Ellison on June 4, pledging to “dramatically rethink” the city’s approach to emergency response.

We are going to dismantle the Minneapolis Police Department.

And when we’re done, we’re not simply gonna glue it back together.

We are going to dramatically rethink how we approach public safety and emergency response.

Is it me, or. is there literally NO ONE in elected position brave enough to take on the police in their city/state.

8,887 people are talking about this

In a TIME op-ed published the next day, Council Member Steve Fletcher cited the MPD’s lengthy track record of misconduct and “decades-long history of violence and discrimination”—all of which are subjects of an ongoing Minnesota Department of Human Rights investigation—as compelling justifications for the department’s disbandment. “We can resolve confusion over a $20 grocery transaction without drawing a weapon or pulling out handcuffs,” Fletcher wrote.

The last person to disband the police was Sting.

1,870 people are talking about this

As we reported earlier, Minneapolis Mayor Jacob Frey said last night that he opposed disbanding the police department at a protest organized and led by Black Visions Collective against police violence in the city. That answer earned him a thundering chorus of boos and chants of “Shame!” and “Go home, Jacob, go home!” The New York Times  – which has become the unofficial media arm of the BLS movement, and which will certainly delighted by today’s outcome in Minneapolis – called the scene a “humiliation on a scale almost unimaginable outside of cinema or nightmare.”

I’ve never seen someone willingly subject themselves to public humiliation the way Jacob Frey just did by coming out to address the protest. I’m in legit shock this man is a masochist

Minneapolis Mayor Jacob Frey is asked whether he will defund the Minneapolis police department, and is subjected to the most intense walk of shame I’ve ever seen. 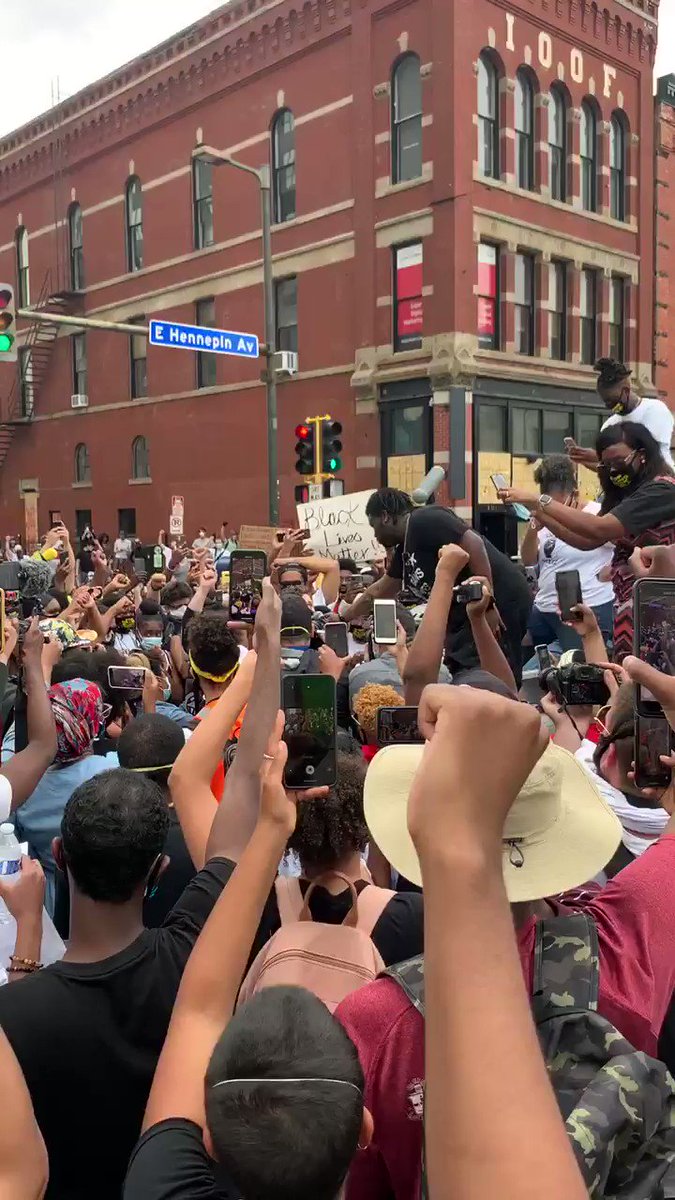 “The last Democratic mayor, Betsy Hodges, handled the murder of Jamar [Clark] poorly. We told her she was going to lose her job. And she did,” Miski Noor, a Black Visions Collective organizer, said on Frey’s refusal to disband the Minneapolis Police Department.

According to The Appeal, for years, “activists have argued that MPD has failed to actually keep the city safe, and City Councilmembers echoed that sentiment today during their announcement.”

MPD’s record for solving serious crimes in the city is consistently low. For example, in 2019, Minneapolis police only cleared 56 percent of cases in which a person was killed. For rapes, the police department’s solve rate is abysmally low. In 2018, their clearance rate for rape was just 22 percent. In other words, four out of every five rapes go unsolved in Minneapolis. Further casting doubt on the department’s commitment to solving sexual assaults, MPD announced last year the discovery of 1,700 untested rape kits spanning 30 years, which officials said had been misplaced.

While Minneapolis may be the first city to take this drastic action, it is hardly the last: the Council’s move is consistent with rapidly-shifting public opinion regarding the urgency of overhauling the American model of law enforcement. Since Floyd’s killing and the protests that ensued, officials in Los Angeles and New York City have called for making deep cuts to swollen police budgets and reallocating those funds for education, affordable housing, and other social services.

Law enforcement officers are not equipped to be experts in responding to mental health crises, often leading to tragic results—nationally, about half of police killings involve someone living with mental illness or disability. As a result, public health experts have long advocated for dispatching medical professionals and/or social workers, not armed police, to respond to calls related to substance use and mental health. Polling from Data for Progress indicates that more than two-thirds of voters—68 percent—support the creation of such programs, versions of which are already in place in other cities such as, Eugene, Oregon; Austin, Texas; and Denver, Colorado.

Well, all those residents of deeply liberal cities are about to get precisely what they want:

“Our commitment is to do what is necessary to keep every single member of our community safe and to tell the truth that the Minneapolis Police are not doing that,” Bender said Sunday. “Our commitment is to end our city’s toxic relationship with the Minneapolis Police Department, to end policing as we know it, and to recreate systems of public safety that actually keep us safe.”

We look forward to finding out just what these “systems” are, and while we know that wealthy residents will have little trouble in obtaining their own private security squads and militia – in fact, we are certain that Minneapolis Fed president Neel Kashkari will be among the first to take advantage of security alternatives even as the Fed’s actions continue to tea apart the nation leading to even greater wealth and income inequality that has culminated in the current social collapse, we wonder just who will protect the less affluent segments of society. For the answer we will keep a close eye on downtown Minneapolis, now police free, for a glimpse into the future of America’s inner cities.

Meanwhile watch as gun sales in Minneapolis – both legal and illegal – and in every other city across the country, explode.