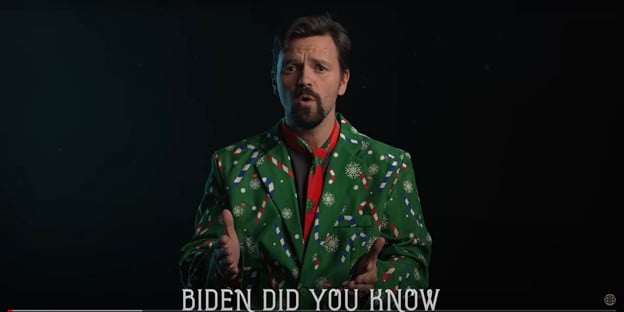 Conservatives across America have for two years righteously expressed anger at the Regime’s disastrous policies destroying our country.   The Babylon Bee, though, reminds us sometimes a different approach other than anger can prove equally effective.

The famous Christian satire website released a Christmas parody on Tuesday called “Biden, Did You Know?”, a play on the classic Christian song “Mary, Did You Know?”  “Biden, did you know?” goes line-by-line mocking Biden’s personal follies along with his regime’s failures while wondering if he even has a clue.

Safe to say when watching his public appearances Americans can safely answer that question. Sometimes he even needs help from his wife to knowing where to go.

Here are some of the funniest and most biting lines:

“Biden did you know? That your baby boy loves parmesan and cocaine?”

“Biden did you know that you shouldn’t touch these women like you do?”

“When you sniff that little girl’s hair, it’s borderline #metoo”

“The wall will cease, the debt increase, And the dead will vote again”

“The crime will leap, the dumb will speak, while we say c’mon man

Videos like this prove why the Babylon Bee is so effective and influential in political circles. Twitter’s old regime recognized this eventually and banned them before Elon Musk brought the Bee back. In fact, the Bee’s banning proved the impetus for Musk’s acquisition of the social media network in the first place.

As mentioned in previous Gateway Pundit articles, conservatives must engage in the culture wars and utilize ridicule. The Babylon Bee, Greg Gutfeld, and others have demonstrated time and again how ripe the left is for ridicule.

Please share this parody far and wide this holiday season. The regime most certainly does not want America to know.