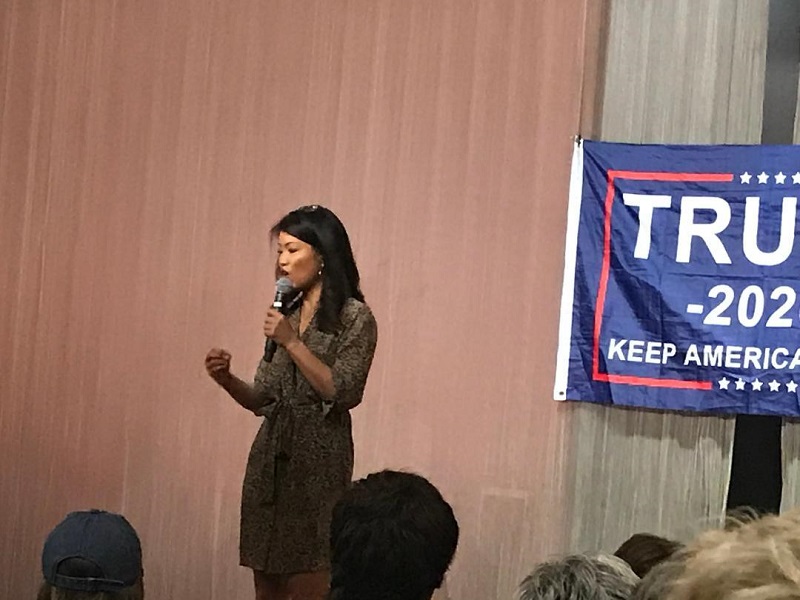 Michelle Malkin recently spoke at an event hosted by the College Republicans at Arizona State University (ASU) in Tempe on February 26th, 2020. I was fortunate enough to attend her speech and offer this report from my birdseye view.

Malkin was born in America following her parents immigrating from the Philippines on an employer-sponsored visa for her father’s medical education. She is an author who has published four books, a journalist and political blogger who founded the highly successful conservative websites. Hot Air and Twitchy, and both a prominent female conservative voice and contributor to Fox News and other national platforms. She also has a syndicated column that can be seen weekly in newspapers and other websites.

Malkin has written and spoken about the subject of immigration and is passionate that America must fix it’s broken immigration system and open borders. She views this as a domestic, economic and a national security issue – with terrorism being something she places high on her list of concerns. Malkin, while labeled as a Conservative, leans Libertarian and supports free markets, less regulation, reducing the size of government’s footprint, and a return to upholding the constitution. Malkin’s agenda also includes calling out political and corporate corruption as well as the cultural and tech elites. Like Conservative Ann Coulter, Malkin is laser-focused on calling out the hypocrisy on the left and media. She is a fierce and strong female voice against the leftist’s false feminist paradigm and attacks on Conservative women in general.

Malkin is a strong defender of the First Amendment, and like other conservative voices on college campuses and venues, have found her scheduled speeches often met with planned protests designed to shut down her speech. On this night at ASU, there were no visible protesters gathered outside the Hall or any disrupters planned inside. Gathered were mostly middle-aged, non-students, peppered with a few people of color. There was mostly a diverse crowd engaging in open and informative exchanges including one transgendered participant. Everyone participating in the event was focused, gracious, and enthused.

Malkin spoke for some time reviewing her background, her target concerns, and enlightened the group on what she described as the challenge of being a “True Conservative”, against the push from the Republican In Name Only (RINOs). Discussing immigration in depth she opposes birthright citizenship and sanctuary cities. She supports ICE, Border Agents and building a wall on most of the appropriate vulnerabilities along the Southern Border. She supports ending chain migration and adhering to a merit-based system of legal immigration.

Malkin touched on her disdain for particular politicians mentioning them by name. Malkin condemned Arizona’s Late Senator, John McCain’s, record on immigration policy over three decades. Senator Mitt Romney of Utah, better known by his fake twitter account name Pierre Delecto. Like McCain, Malkin considers both as classic RINOs. Though she did not openly throw support behind any specific candidate for office, it was clear to me she is not endorsing Senator McSally for re-election to the Senate representing Arizona. Malkin had many reasons, but mainly McSally is a McCain clone much like Pierre Delecto (Romney) of Utah. However, President Trump has fully thrown his support behind Martha McSally and at a rally in Arizona when he brought her up on stage to give her praise.

The following is part 1 (part 2 Q&A) of the event from the College Republicans at Arizona State University:

Perhaps the lack of any organizing resistance against Malkin at the event, and allowing freedom to speak one’s thoughts – Malkin has been silenced in the past – is a positive sign that the student body of ASU and the country as a whole is waking up. Perhaps, the youth are finally seeing through the lies on the Left, and willing to tolerate divergent thought to flourish. Michelle Malkin is a warrior on the front lines for truth, and I thoroughly enjoyed Malkin’s speech and participation at the event. If you get a chance and she is appearing in your area, I suggest you consider attending one of her speeches – food for the conservative spirit.